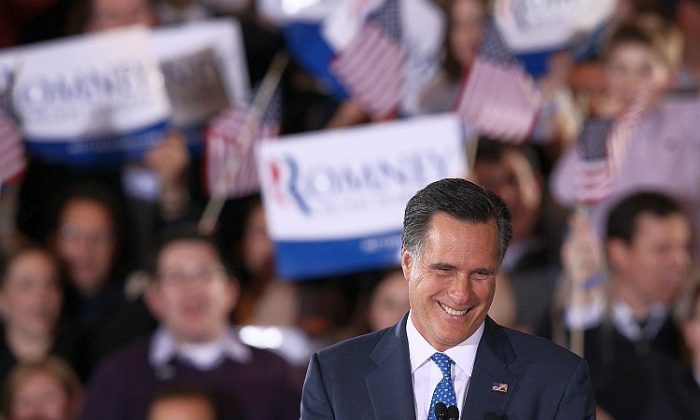 Mitt Romney and Rick Santorum battled in Ohio to a virtual tie on Super Tuesday—and the primaries have come no closer to offering a decisive leader in the GOP race.

Romney took the lead in Ohio over Rick Santorum by a small margin and won four other states on the night—his home state Massachusetts, Vermont, Virginia, and Idaho.

But former Pennsylvania Sen. Rick Santorum was the surprise of the night, winning Tennessee, Oklahoma, and North Dakota, and strongly contesting Ohio, pushing the result to a virtual tie.

Santorum won Tennessee by 10 points, a bigger loss for Romney than he might have wanted for the more moderate conservative state.

Former House Speaker Newt Gingrich won his home state Georgia, while Texas Rep. Ron Paul did not win a state but is likely to pick up more delegates from the day.

But it was Ohio, a bellwether state that dominated the Super Tuesday contest, with Rick Santorum a strong challenger.

Santorum had been leading in the Rust Belt by 10 points in the weeks leading up to the polls but a bad week and a largely mistake-free period for Romney set him back. He took a strong lead early on Super Tuesday night in Ohio, however, as rural regions came in but moderate and independents in urban areas gave Romney the lead in the final hour of the count.

The close race in Ohio and Santorum’s ascendancy in Tennessee, a state Romney was considered to have a good chance to win, will strike a chill through the Romney campaign, ensuring a long and hard slog to the Republican Convention in August.

It may also come down to a final delegate count, a strategy the Romney camp is already factoring in. Both Santorum and Gingrich failed to qualify for the ballot in Virginia, leaving Romney to share those delegates with libertarian Ron Paul, who gained 41 percent of the vote there.

In Ohio, too, Santorum failed to qualify for the ballot in several of the state’s congressional districts, making him ineligible to collect 18 of the 66 delegates.

Speaking on election night from Boston, Romney gave a well-prepared speech, congratulating his rivals on their win and moving quickly onto national issues—the economy, the price of fuel, and unemployment.
He thanked his supporters, saying, “I am not going to let you down. … I am going to win this nomination.”

In an indication that the campaign team was well focused on the number of delegates he might gain, he also added, “Tonight we are doing some counting.”

According to CNN exit polls, Romney was the first choice, for 43 percent for those voters who said being able to win against President Barack Obama was their primary concern in selecting a candidate.

Santorum, however, was the first choice among those who were looking for someone who shared their values.

Santorum held his election night in Steubenville, Ohio, saying it was an area close to “his roots,” and appeared on stage with an extended family including his wife, children, mother, and brother, plus family members of his wife, who was 1 of 11 children.

“This was a big night tonight,” he said, before the final votes had come in, telling supporters that he was “going to win a few and lose a few.” He listed out the states he had won to date, noting he had competed successfully with far less money than his main competitor Mitt Romney.

“We went up against enormous odds in every state, and just like the people of this country, we overcame odds,” he said.

Interviewed by CNN later in the evening, Santorum said he and his team felt great.

“We are in this race and we are in it to stay and that means all the way to the convention center,” he said.

There were no surprises in Former House Speaker Newt Gingrich’s win in Georgia. It is his home state, the state he represented for 20 years, and he had focused most of his time there over the last month. Georgia is his second win in the GOP race and will yield a fair proportion of the 76 delegates from there.

Gingrich took aim at Republican elites and the other candidates in his election speech, thanking his supporters for keeping his campaign alive.

“We survived the national elite’s efforts to kills us in the summer because of you,” he said describing the other GOP candidates as “bunny rabbits” running through the GOP race.

He told his supporters that he would be going on to Alabama, Mississippi, and Kansas, adding “and that is just this week.”

There will be four more caucuses on Saturday, March 10: Northern Marianas, the Virgin Islands, and Guam all with 9 delegates, and Kansas with 40.

The Alabama and Mississippi primaries, plus American Samoa and Hawaii caucuses, will be held on Tuesday, March 13.