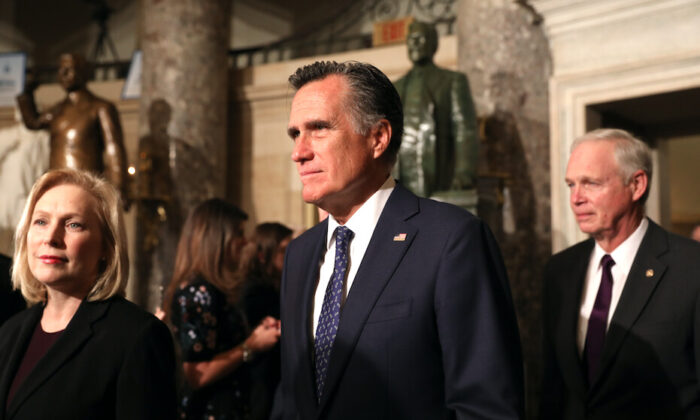 Sen. Mitt Romney (R-Utah) walks through Statuary Hall with other senators to the House Chamber for President Donald Trump’s State of the Union address in the Capitol in Washington on Feb. 4, 2020. (Charlotte Cuthbertson/The Epoch Times)
By Zachary Stieber

“The president asked a foreign government to investigate his political rival. The president’s purpose was personal and political. Accordingly, the president is guilty of an appalling abuse of public trust,” Romney, 72, said on the Senate floor in Washington on Feb. 5.

Romney, who said he supports “a great deal of what the president has done,” is the only Republican to commit to voting to convict Trump, 73.

Romney did not say on the floor which of the articles he’d vote for, or whether he’d vote for both, but he told media outlets that he’d vote to convict on the first article of impeachment, abuse of power, but vote against the second article, obstruction of Congress.

The vote is symbolic because of the 53-47 Republican majority in the chamber and the high bar—a supermajority—required to convict the president and remove him from office. No president has ever been removed from office through impeachment in the history of the country.

“I acknowledge that my verdict will not remove the president from office. Voters will make the final decision,” Romney said on the Senate floor.

Romney, the GOP’s 2012 nominee, has had a hot-and-cold relationship with Trump, getting the president’s endorsement in 2018, but frequently criticizing Trump after winning in the midterm elections. Romney was one of two Republican senators to vote last week to subpoena witnesses in the impeachment trial, a bid that fell short when Sen. Lisa Murkowski (R-Alaska) announced she would vote against calling witnesses.

Romney said that he took an oath before God to hear the case before deciding how to vote.

“I am profoundly religious. My faith is at the heart of who I am. I take an oath before God as enormously consequential. I know from the outset the task of judging the president, the leader of my own party, would be the most difficult decision I’d ever face. I was not wrong,” he said.

Romney said that no evidence Joe Biden or Hunter Biden committed any crime was presented by Trump’s legal counsel during the Senate trial. “The president’s insistence that they be investigated by the Ukrainians is hard to explain other than a political pursuit,” he said.

Trump’s 2019 phone call with Ukrainian President Volodymyr Zelensky included the president asking his counterpart to “look into” the Bidens. Trump noted that Joe Biden in 2018 recalled how in 2016 he pressured Ukraine to oust a prosecutor who was probing Burisma. Hunter Biden worked for Burisma from 2014 to 2019.

Trump and both Bidens have denied wrongdoing.

Three other moderate Republicans said they would vote to acquit Trump in recent days, despite reservations about what he did.

Trump’s actions, Murkowski, 62, said on the Senate floor on Feb. 3, were “shameful and wrong.”

But removing the president from office would be “the political death penalty.”

Sen. Lamar Alexander (R-Tenn.), 79, said during an appearance on NBC’s “Meet the Press” over the weekend that he would also vote to acquit. He said Trump would “think twice” in the future after the president’s call with Zelensky was placed in the spotlight.

And Sen. Susan Collins (R-Maine), 67, days after she voted with Romney to call witnesses in the trial—a motion that failed 49-51—said she would vote to acquit.

“I believe that the president has learned from this case,” Collins told CBS News on Feb. 4.

The impeachment by the House served as “a pretty big lesson” for Trump, Collins claimed. I believe that he will be much more cautious in the future.”