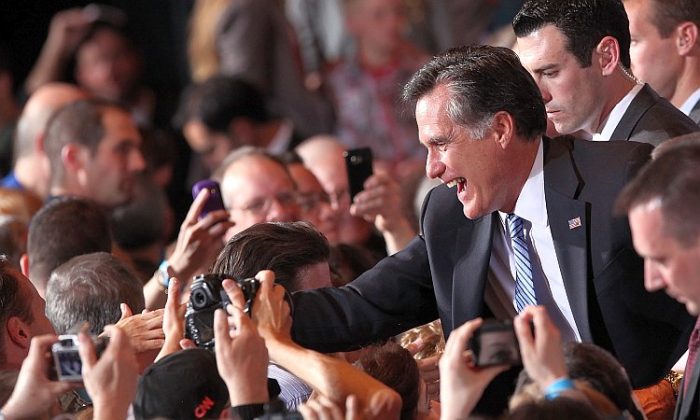 Mitt Romney consolidated his hold in the GOP race, winning the Nevada caucuses with a solid lead on Saturday.

The win follows a 14-point victory in Florida last week, setting the scene for upcoming caucuses in Colorado, Minnesota, and Missouri on Tuesday, and primaries in Michigan and Arizona at the end of the month.

CNN entrance polls suggest Republicans are starting to coalesce around Romney, with the former Massachusetts governor for the first time leading in nearly every voting group.

In a noticeable shift among the Republican base, Romney was the most popular candidate for supporters of the Tea Party, slightly above his nearest rival Newt Gingrich, with more than half those identifying as “very conservative” supporting him, according to the polls.

Of the 43 percent of people who said beating Obama was the most important candidate quality, 70 percent chose Mitt Romney.

Speaking to supporters in Las Vegas, Romney dwelt little on his rivals, instead focusing as he had done in Florida on President Obama and the economy.

Romney now has three wins out of five contests behind him and is gaining in endorsements.

Romney’s rivals, however, have vowed to continue, despite poor showings.

Following his loss in Florida, Newt Gingrich, an assured leader in the South Carolina primary, has suffered a further setback in Nevada, particularly as Romney showed increased support across voter groups.

The former House speaker remained upbeat despite the losses, with analysts predicting he will endeavor to hang on until Super Tuesday March 6. Over 10 states vote on that day, a number of them Southern states, which may deliver enough delegates to Gingrich to prevent Romney from reaching the necessary 1,144 delegates to win the nomination.

“We will continue the campaign all the way to Tampa,” Gingrich told reporters post the Nevada election, adding, “I’m not going to withdraw.”

Santorum and Paul
Rick Santorum is also maintaining his campaign, telling CNN Saturday night, “This race is a long, long way from being over. Eventually this race will come to us.”

In the lead up to Saturday’s caucus, Santorum spent little time in Nevada, focusing instead on Colorado and Minnesota caucuses.

Both states are reported to have high proportions of conservative evangelical voters that may work in Santorum’s favor, with Minnesota bordering Iowa where Santorum was declared the late winner.

Recent polls conducted by Public Policy polling have put Santorum behind Romney but ahead of Gingrich in both states.

Nevada’s third place finisher, Texas Rep. Ron Paul, said he is pleased with his campaign despite not having won a state to date.

“Of course you set [your target] for victory, but you have to live within the real world,” Paul said on ABC’s “This Week.” “But we have three or four caucus states that we believe our numbers are doing pretty good, and we have to wait and see and keep doing exactly what we’re doing.”

Paul continues to appeal to young voters and independents with his libertarian views, gaining 46 percent of the vote amongst independents and 41 percent among 17 to 25-year-olds, in the CNN entrance polls taken in Nevada.