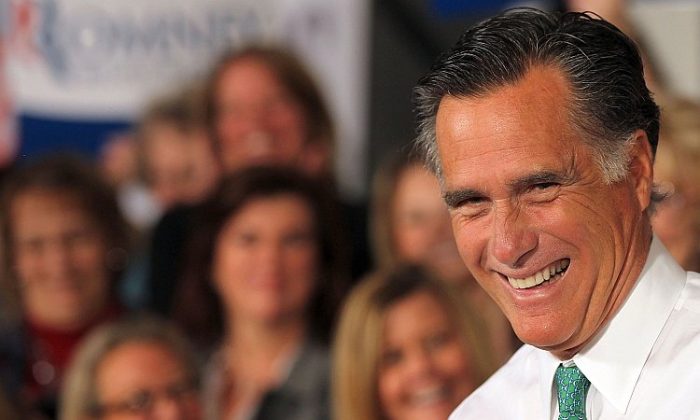 Mitt Romney is upping his general election campaign following Rick Santorum’s exit from the GOP race last week, but with that comes a shift to the middle ground. How skillfully he manages to do that will be evident over the next few weeks.

In a campaign step up, Romney announced Monday that the search for a vice president pick is on, confirming that Beth Myers, a trusted advisor who has worked with Romney since his days as governor of Massachusetts, will help with the search.

“This weekend was the first time we seriously really talked about it, and there are some wonderful people out there,” Romney told ABC News.

Romney has not yet been officially declared the Republican presidential nominee, as rivals former House Speaker Newt Gingrich and Texas Rep Ron Paul remain in the GOP race. But with the closest rival Santorum out, endorsements high, and the former Massachusetts governor’s delegate count three times that of Gingrich’s and Paul’s combined, Romney has switched to general election mode, which some analysts say is a shift to the middle.

“It is a rule of thumb in American politics that after you have won your nomination, you have to go to the people who are not your enthusiasts, so usually independents,” said Stephen Hess, political analyst with the Brookings Institution. “Democrats move to the right and Republicans move to the left.”

This may be challenging for Romney given this year’s contentious GOP race, and his inability to garner support from the more conservative wing of the Republican Party.

Romney must now run a two-fold strategy, Hess says: He must “focus all his ammunition on Obama,” but must also unite his own party, “particularly those people who were against him.”

“The first thing you had best do is make sure your own party is behind you,” warns Hess, a veteran of U.S. presidential campaigns, having worked in an official capacity for four past U.S. presidents.

Ultimately they will vote for Romney, with the focus now on removing Barack Obama, Hess said, “but if they can do it enthusiastically, he is a lot better off.”

How skillfully Romney achieves the balance will be evident in the coming weeks. In a briefing to reporters before the National Rifle Association (NRA) annual meeting in St. Louis last Friday, a Romney advisor, who wished to remain anonymous, said Romney would be articulating a clear choice between his presidency and that of Obama’s in upcoming speeches, commencing with the NRA speech, CNN reported.

“This, in our view, is the beginning of crystallizing for voters the choice that they are going to have in the fall, between a big government liberal, represented by Barack Obama, and somebody who believes in the freedoms that are an essential part of our Constitution, which are consistent with our founders—and that would be Mitt Romney,” the advisor was reported as saying.

Romney’s speech to the NRA was the first major speech to a conservative group since Santorum dropped out, and was an exercise in the balancing act he must achieve in the run up to the November election. The NRA audience consisted of gun enthusiasts with whom he has not always seen eye to eye.

Romney owns a lifetime NRA membership, but he purchased that membership not long before he started running for the 2008 Republican nomination for president. In 1994, while running for the Senate, Romney supported mandatory waiting periods for gun sales, plus federal legislation that would have banned the sale of some assault weapons.

As governor of Massachusetts, he also signed a permanent ban on the sale of assault weapons and quadrupled gun-licensing fees, AAP reported.

Romney mostly avoided gun-related issues during the NRA speech, hinting only that he would support the Stand Your Ground law, currently controversial following the shooting of Trayvon Martin last month.

“We need a president who will stand up for the rights of hunters and sportsmen and those seeking to protect their homes and their families. President Obama has not,” he said. “I will.”

Romney focused most of his speech on principles and broader election issues, describing Obama as a threat to “economic freedom, religious freedom, and personal freedom.”

“So many of the big issues in this campaign turn on our understanding of the Constitution and how it was meant to guide the life of our nation,” Romney said. “This president is moving us away from our founders’ vision. Instead of limited government, he is leading us toward limited freedom and limited opportunity.”

The audience reportedly applauded Romney politely, but the response was marked by the appearance of Newt Gingrich on stage. The audience took to their feet and cheered, one man shouting: ‘Go Newt’ and another yelling ‘Take it to Tampa,’ encouraging Gingrich to stay through to the Republican convention, NPR reported.

Clearly uniting the party behind him and moving to the middle ground will be a significant challenge for Romney. Reports surfaced last week about the political risks of being too closely associated with congressional Republicans.

According to Washington-based political news outlet, Politico, a senior Romney official, speaking on the condition of anonymity, articulated the relationship, saying Republicans in Congress and Romney were “not going to be 100 percent linked up” but did share “the same mindset” in defeating President Obama.

“What I would say is that there’s a time to work with folks up there, and there may be other times where we may pursue our own path,” the official said.