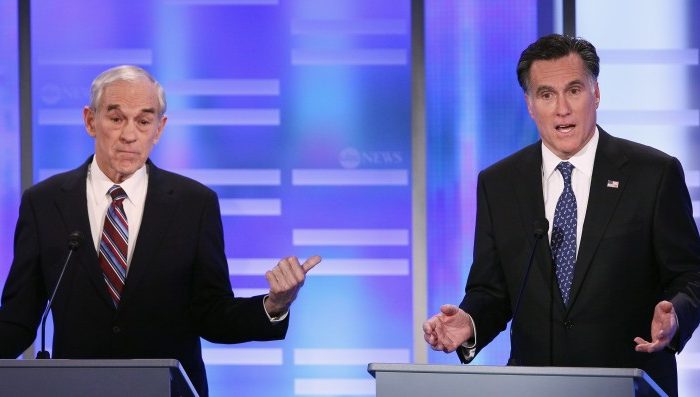 The six remaining contenders in the Republican race for the White House had a busy weekend, participating in two nationally televised debates in New Hampshire a few days ahead of that state’s GOP primaries, which will take place on Jan. 10.

Front-runner and former Massachusetts Gov. Mitt Romney, who is currently holding a double-digit lead over all other contenders in New Hampshire primary polls, emerged largely unscathed from Saturday evening’s debate, which was sponsored by ABC, Yahoo! News, and WMUR, the ABC-affiliate television channel in New Hampshire.

Sunday morning’s debate, hosted by NBC’s “Meet the Press” and moderator David Gregory, however, was a different story.

While attempting to describe himself as a lifelong businessman rather than a career politician, Romney came under fire from several of his opponents, who insisted that Romney was not the everyman he was portraying himself to be.

“Can we drop a little bit of the pious baloney?” responded a combative Newt Gingrich, who subsequently engaged the governor in a verbal sparring match. “Now you’re back running. You have been running consistently for years and years and years. So this idea that suddenly citizenship showed up in your mind, just level with the American people. You’ve been running for—at least since the 1990s.”

Despite the criticism Romney suffered at the hands of his fellow candidates Sunday morning, the latest Suffolk University/7News poll has Romney gaining the support of 35 percent of likely New Hampshire GOP primary voters. The closest runner-up thus far is Congressman Ron Paul (R-Texas) at 20 percent.

While Paul has received numerous opportunities to air his views during recent debates, the fact remains that philosophically, Paul remains rather distant from mainstream Republicans, with his unorthodox foreign policy views and desire to get rid of the Federal Reserve.

While he retains a dedicated following throughout the entire country, his libertarian platform has yet to resonate with the majority of the party, and grow his base of support throughout the primary race.

According to the Suffolk poll results, former Utah Gov. Jon Huntsman came in third at 11 percent, and former Speaker Newt Gingrich is at 9 percent. Former Pennsylvania Sen. Rick Santorum and Texas Gov. Rick Perry bring up the rear, at 8 and 1 percent respectively.

Huntsman had a relatively strong debate performance over the weekend, primarily clashing with the other candidates over China policy and making broad statements about the need for Americans to come together and unite to solve the country’s problems.

Perhaps Huntsman’s most impressive moment came when he pushed back against Romney’s attacks on his service to the Obama administration as Ambassador to China.

“He criticized me while he was out raising money for serving my country in China, yes, under a Democrat, like my two sons are doing in the United States Navy,” said Huntsman. “They’re not asking who [or] what political affiliation the president is. I want to be very clear with the people here in New Hampshire and this country: I will always put my country first. And I think that’s important to them.”

While Huntsman’s moderate, middle-of-the-road rhetoric is unlikely to garner him much additional support beyond the 9 or 10 percent at which he is currently polling in New Hampshire, his strong debate performance sets him up to be a good choice among undecided voters.

Meanwhile, support for Sen. Rick Santorum seems to have stalled a bit after his impressive virtual tie with Romney in the Iowa caucuses. The Santorum campaign has, in recent weeks, been attempting to portray Santorum as the principled, conservative candidate in contrast to Romney’s perceived flip-flopping.

While Santorum and his campaign enjoyed an impressive and largely unanticipated victory in Iowa, the social conservative may have trouble garnering support among independents and Democrats in New Hampshire.