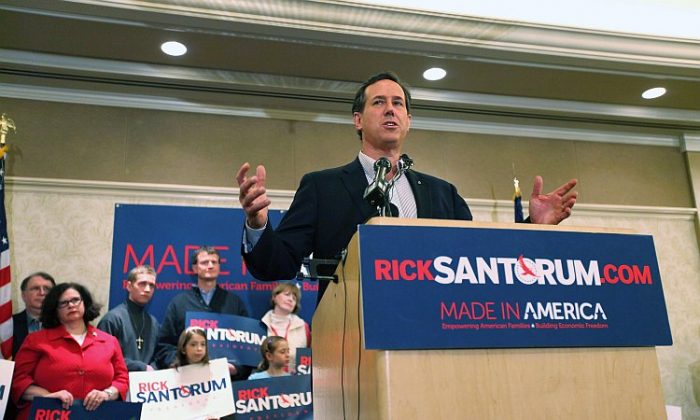 Republican presidential candidate former Massachusetts Gov. Mitt Romney speaks during a campaign rally at Caster Concepts on Feb. 27 in Albion, Michigan. With one day to go before the Michigan and Arizona primaries, Mitt Romney continues to campaign throughout Michigan. (Justin Sullivan/Getty Images)
US

Romney and Santorum in Tight Contest

Mitt Romney has moved ahead of Rick Santorum in the Michigan and Arizona polls but Santorum is campaigning hard as voters turn out for primaries in both states, Tuesday, Feb. 28.

The former Massachusetts governor was behind last week but has surged on the strength of his performance in the televised national debate in Arizona last Thursday.

According to an average of four Sunday polls compiled by RealClearPolitics, Romney leads 37.3 percent to Santorum at 35.8 percent. Only one of those polls, the Mitchell/Rosetta Stone, had Santorum ahead, but that was marginal at two points.

Speaking in Albion, Mich., Romney was upbeat telling supporters, “This sure has been fun these last 10 days or so. We started out about 15 points down in the polls. Now we’re leading in the polls,” he said.

Romney is also well ahead of Santorum in Arizona, polling 41.4 percent to Santorum’s 28.2 percent, but Michigan will be the one to win to consolidate his lead according to Jennifer K. Marsico, political analyst at American Enterprise Institute.

Michigan is Romney’s home state and if he loses it will be a sign of weakening Republican support, Marsico told The Epoch Times.

“If he loses his home state, his fundraising numbers would likely be hurt, and his argument that he is the most electable candidate versus President Obama becomes less believable,” she said in an e-mail.

Rick Santorum meanwhile has been campaigning strongly in Michigan. Set back in the national televised debate by a Romney trap to defend decisions he made in Congress while senator for Pennsylvania, Santorum has mounted his own attacks on Romney, describing him as “uniquely unqualified” to be the GOP nominee and questioning his conservative credentials.

“To be attacked on television as someone who is not a true conservative by a Massachusetts governor is a joke,” Santorum said in a campaign stop in Michigan.

In a move to focus the debate away from social issues to the economy, Santorum has unveiled an economic plan for the first 100 days of his administration that he says will revive the economy and bring jobs back to the U.S. from China.

“We can revive this economy immediately, if we cut taxes across the board and repeal the radical job crushing environmental policies of this Administration,” he said on his website.

He also called for just two income tax rates and said he would repeal Obama’s healthcare plan and also the Dodd-Frank legislation, which he said “is making it harder for businesses to get access to credit and for Americans to buy houses and refinance.”

Whoever wins the primary in Arizona stands to gain 29 delegates, that state having a winner-takes-all ruling.

There are 30 delegates to be gained for Michigan but some will be proportionally distributed and some will be winner-takes-all.