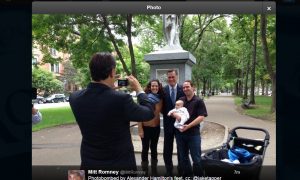 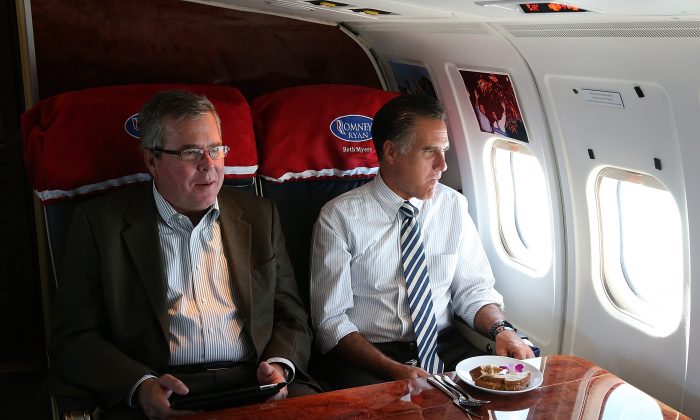 Romney and Bush Meet in Utah, but Don’t Expect a Joint-Ticket

Mitt Romney and Jeb Bush, considered the leading candidates in the Republican presidential primary, reportedly met in Utah on Thursday, sparking speculations of a possible joint-ticket in the 2016 election.

In a CBS poll from January, the 2012 Republican presidential nominee and the ex-Florida governor were the most popular candidates among likely Republican primary voters, and although neither have formally announced their candidacies, both have expressed strong interest in entering the race.

Bush formed a presidential exploratory committee back in December, and last week Romney delivered the outline of a populist campaign platform at a winter meeting of the Republican National Committee.

Some observers see the meeting not as an exploration of a joint-candidacy, but a negotiation for one of them to take a step back in the race.

“The prospect of a Bush-Romney ticket seems very unlikely, if only because they duplicate so many of each other’s strengths and vulnerabilities,” said Dan Schnur, a former Republican strategist who worked on John McCain’s 2000 presidential campaign.

The prospect of a Bush-Romney ticket seems very unlikely, if only because they duplicate so many of each other’s strengths and vulnerabilities.
— Dan Schnur

Schnur says that presidential candidates usually choose a running-mate who would complement their electoral appeal to voters, and the stark similarities between Romney and Bush effectively rules out a joint-ticket.

“Both appeal to the more centrist and establishment wing of the party, both are former governors who’ve succeeded in the private sector, both would be competing for the same votes in a primary, so if either one emerges as the nominee, they would pick someone younger, with a different set of experiences, and a different demographic makeup,” Schnur said.

Like Romney, Bush has worked extensively in the private equity sector, although he entered the field after a successful career in politics.

“[In their] immediate circle of supporters … there may be more overlap in the two of them than with any other two presidential Republican candidates,” said Harper Polling president Brock McCleary, who served as polling director of National Republican Congressional Committee from 2010 to 2012.

Schnur says that its likely the two will work together to avoid a protracted, internecine fight for the support of the party establishment, but he doesn’t expect an agreement to be reached immediately.

“They might not come to a decision in this meeting, but at a certain point it’s much more likely than not that one of them will blink, step aside to allow the other one to run,” Schnur said.

“The most likely running mate for one of them is probably one of the midwestern governors considering the race … [like] Scott Walker of Wisconsin, Mike Pence of Indiana, John Kasich of Ohio … [or possibly] a Senator like Rob Portman or Marco Rubio.”

Others downplay the importance of Thursday’s meeting, and see a prolonged Republican primary as all but inevitable.

“There’s some logic to trying to consolidate some coalition of that kind, I don’t think all the logic in the world will make a difference, I think both of them see themselves worth serving as president,” McCleary said.

Schnur says that in the event both of them run, it’s unlikely both will sustain popularity for long because the establishment group of voters would quickly rally around one candidate to counter the more populist, culturally conservative candidate like Mike Huckabee or Bobby Jindal, but McCleary expects a long primary regardless of the outcome of the meeting.

“I think there will be enough of a hard-fought and ugly campaign whether Jeb Bush or Mitt Romney both run, one of them runs, or both don’t run. The nastiness of a presidential primary is not contingent in one candidate, it’s the nature of the beast,” McCleary said.