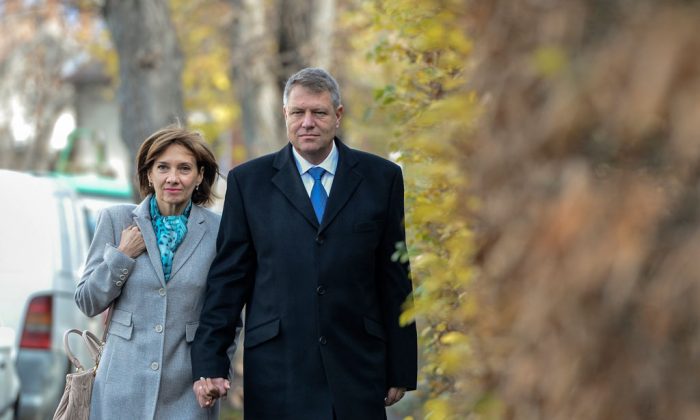 Klaus Iohannis, leader of Romania's center-right Liberals and mayor of the Transylvanian city of Sibiu, holds his wife Carmen's hand while walking to a polling station in Sibiu, in the central Romanian Transylvania region, Sunday, Nov. 16, 2014. Romanians have begun voting in a presidential runoff between the prime minister who promises stability and a city mayor who says he will fight corruption. The winner will replace President Traian Basescu, who steps down after 10 years. (AP Photo/Andreea Alexandru, Mediafax)
Europe

Prime Minister Victor Ponta had been the favorite to win, but was defeated by Klaus Iohannis, the mayor of the city of Sibiu who promised to crackdown on corruption. Ponta said he had personally congratulated Iohannis.

“We are a democratic country,” Ponta said outside the headquarters of his Social Democratic Party two hours after polls closed. “The people are always right.”

With one-third of the votes counted, Iohannis was leading with 56 percent of the vote, while Ponta had 44 percent, authorities said early Monday.

The winner will replace President Traian Basescu, who is stepping down after 10 years.

Ponta called on some 15,000 protesters gathered outside his offices to listen to his message in an apparent attempt to defuse tensions over difficulties encountered by expatriate Romanians voting abroad.

The protest turned into a celebration as the tall Iohannis walked through the jubilant crowd, smiling broadly and shaking hands with people gathered in a square where demonstrators were shot dead during Romania’s 1989 revolution.

“Thanks to you, another kind of Romania is beginning,” Iohannis said on his Facebook page. “The Romania we want is not one of conflict or revenge.”

“Your vote and your word are its foundation. Let’s put the first brick on this building and let it be a lasting one!”

About 300,000 Romanians who live overseas voted Sunday, many against the government. There were protests that they had been unable to vote in the Nov. 2 election that led to the runoff.

Some Romanians waved toothbrushes to protest long waits at polling stations abroad and thousands protested in Munich, according to Mediafax news.

Romanians living overseas must vote at polling stations in the countries where they are, and thousands of expats protested after they had to stand in line for hours in cities such as Paris, London, and Munich during the first round. Some were unable to vote.

The government said it had improved the voting procedure this time at facilities, including Romanian embassies.

Ponta led by 10 percentage points in the Nov. 2 vote, and corruption probes of senior Ponta aides appeared not to have dented the 42-year-old former prosecutor’s chances.

The 55-year-old Iohannis has promised an independent judicial system.

In Romania, the president is in charge of foreign policy and defense, and names key prosecutors and the chiefs of intelligence services.