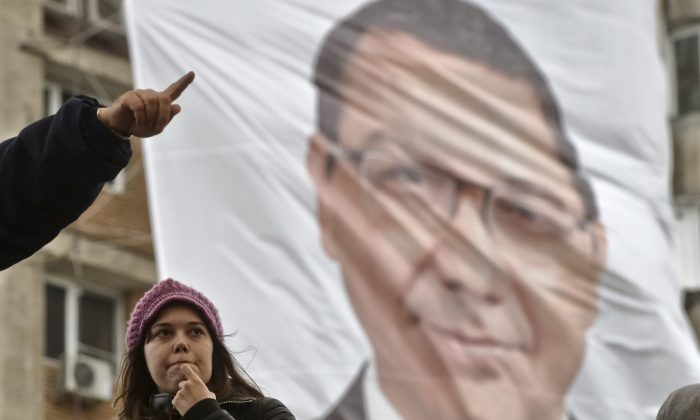 A man gives directions to a young woman, in Bucharest, Romania, Saturday, Oct. 25, 2014, backdropped by a campaign poster, attached to the facade of an apartment block, depicting Prime Minister Victor Ponta, leader of the ruling Social Democracy Party (PSD) who runs for president in elections set to take place on Nov. 2. Several prominent members of the PSD came under investigation for corruption related crimes in recent weeks, ahead of the presidential election in which the Social Democratic Party leader, Prime Minister Victor Ponta, is the favorite. Ponta says the probes will not harm his chances. (AP Photo/Andreea Alexandru, Mediafax) ROMANIA OUT
Europe

BUCHAREST, Romania— Romania’s parliament on Tuesday voted to keep the immunity of the prime minister, who is a suspect in a corruption probe.

Lawmakers voted 231-120 against anti-corruption prosecutors’ request to prosecute Victor Ponta. The premier is suspected of corruption charges, including being an accomplice to tax evasion from 2007 to 2008 while serving in Parliament, a conflict of interest and money laundering.

After the vote, President Klaus Iohannis renewed his call for Ponta’s resignation and criticized Parliament for voting to keep Ponta’s immunity.

“It is a proof of maximum irresponsibility and lack of respect for public opinion that most lawmakers are preventing justice from doing its duty … to save a single person,” Iohannis said in a statement.

The U.S. Embassy said in a statement that “allegations of wrongdoing by government officials should be fully investigated without interference, and the law should be applied equally to everyone. “

The Dutch embassy echoed the comments and went a step further, saying “recent developments in Parliament raise broader issues about the attitudes toward justice and corruption in Romania.”

Ponta earlier told foreign media that he considered resigning after being informed that he was a suspect last week, but decided to stay on to ensure political stability. He denies wrongdoing and says he will cooperate with prosecutors.

Iohannis has said that he would prefer the whole government to resign, not just Ponta.

Ponta’s center-left government faces a vote of no-confidence on Friday. The prime minister said he hoped he would survive.

Ponta told journalists that the political crisis was an “an unexpected gift” for Russia, which has cool relations with Romania.