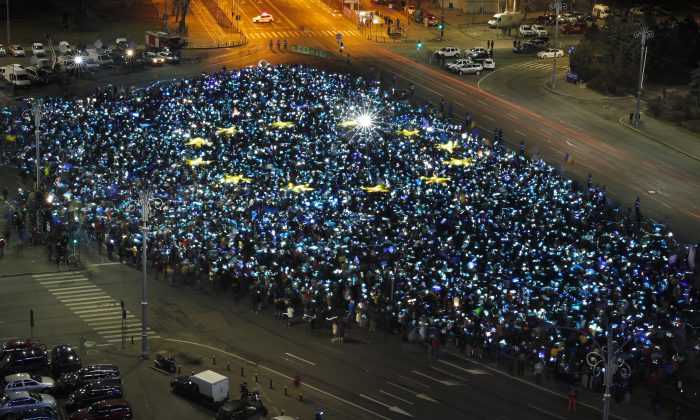 People light the flashes of their mobile phones in the colors of the European Union flag during an anti-government protest demanding the government's resignation, outside the government headquarters in Bucharest, Romania on Feb. 26, 2017. (AP Photo/Vadim Ghirda)
Europe

BUCHAREST, Romania—Thousands of Romanians have staged another anti-government protest, standing together to form a European Union flag to signal support for the bloc and its values.

Demonstrators shouted “Resignation!” and “You thieves,” then later stood in the shape of the EU flag’s circle of 12 yellow stars on a blue background. The flag signifies unity among Europeans.

Police closed roads leading to the square where the government has its offices.

Romanians have been taking part in nightly protests since the government passed a since-rescinded ordinance last month that would have eased penalties for some official misconduct.

On Saturday, thousands of people gathered for a pro-government rally in southern Romania.