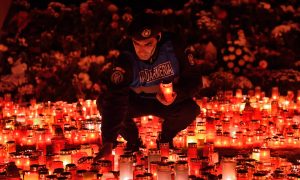 How Could a Fire in a Nightclub Bring Down the Romanian Government?
0
Romanian Prince Put Under House Arrest in Real Estate Fraud
Europe

Paul was charged Saturday with money laundering and influence-buying in a case involving the restitution of real estate that prosecutors say cost the state 136 million euros ($150 million). The 67-year-old prince again denied any wrongdoing Saturday.

How Could a Fire in a Nightclub Bring Down the Romanian Government?

Prosecutors say starting in 2006, a politically-connected businessman and four others used their influence to get the state to restitute land to Paul, which he in turn gave them a share of the value of that land.

The land had been confiscated from the royal family by Romania’s communist regime. Paul is estranged from his uncle, King Michael, who was forced to abdicate by the communists in 1947.