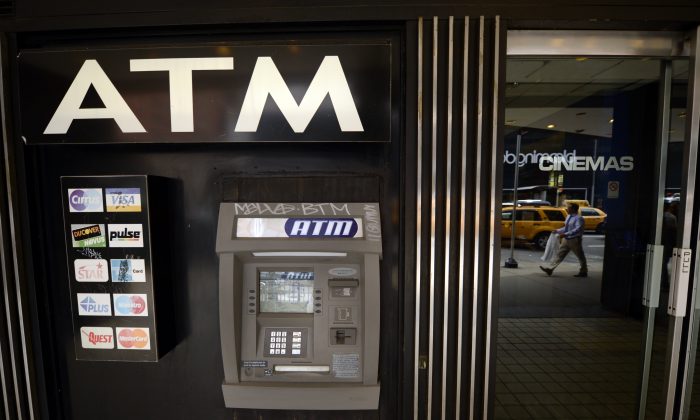 An ATM machine on Third Avenue is viewed in New York on May 10, 2013, just one of the many that were used as cyber thieves around the world stole $45 million by hacking into debit card companies, scrapping withdrawal limits and helping themselves from cash machines, U.S. authorities said May 9, 2013. (TIMOTHY A. CLARY/AFP/Getty Images)
US

NEWARK, N.J.—A Romanian national was sentenced to nearly five years in prison Tuesday for participating in a scheme that stole bank account information from thousands of customers by installing card-reading devices in ATMs.

A federal judge sentenced Robert Mate to 57 months in prison for his role in what the U.S. attorney’s office called one of the largest such conspiracies ever uncovered. It is estimated multiple banks were defrauded out of at least $5 million, and thousands of customers were affected.

Mate, 31, who also went by the name Marcel Varga, pleaded guilty to one count of conspiracy to commit bank fraud. He also will be required to pay about $7.4 million in restitution under terms of his plea agreement.

Authorities uncovered the scheme in 2013. Fifteen of 16 people charged in the conspiracy have been convicted and one remains elusive, according to the U.S. attorney’s office.

Mate and the others, including mastermind Marius Vintila, also of Romania, used the card-reader devices and pinhole cameras at ATMs in New Jersey, New York, Connecticut, Florida and other states. The information taken from customers’ bank cards through the process known as “skimming” was used to produce fraudulent cards and make withdrawals from other people’s account.

Vintila was sentenced last year to 10 years in prison. He used an alias to rent storage units where the group stored cash, the skimming devices and other materials used in the scheme. He also allegedly provided members of the group with fake passports and aliases.