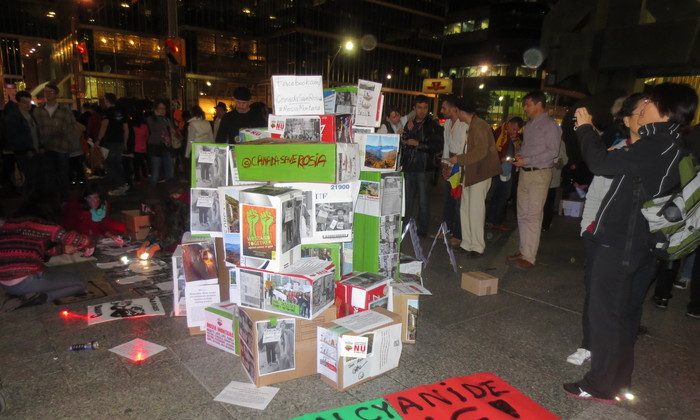 TORONTO—A public art protest against the Rosia Montana Gold Corporation mining project in Romania was held Saturday night at one of the busiest intersections of downtown Toronto. Among the protests against the proposed project that began more than a month ago in the city, this one seemed to have the largest impact on passersby.

Protesters built a “mountain” of cardboard boxes bearing the campaign message, “Save Rosia Montana,” to symbolize the four mountains in Romania that would have to be levelled to make way for the gold mining project, which is led by Canadian-owned Gabriel Corporation.

That night, the protesters gathered in a traditional dance, surrounding the “mountain” and chanting, “United we save Rosia Montana.”

“Since Gabriel Corporation is a company registered in Canada, it is our duty and responsibility as Romanians and Canadians to let the Canadian public know what is happening abroad at Rosia Montana and in [Romania],” said Juliana Dutkay, one of the event organizers.

If it goes ahead, the mine will use thousands of tons of cyanide to extract the gold, leading to fears of a repeat of the Baia Mare cyanide spill in 2000, when cyanide from a gold mine near Baia Mare, Romania, polluted waters as far away as the Danube.

The leak, which killed large numbers of fish in Hungary and Yugoslavia, has been called the worst environmental disaster in Europe since Chernobyl.

The Toronto protest sparked interest and support among passersby who stopped by to find out more information and sign the petition against the project that would cause severe environmental damage to the Rosia Montana region of Romania.

A young couple, originally from Mexico, wished the protesters success and encouraged them to not to give up, saying, “United, we will succeed.”

They proudly shared the case that occurred in 2011 in Baja California, Mexico, where another Canadian company tried to implement a similar project near the Sierra de la Laguna, the only source of drinking water in the region.

Foreign mining operations ended up being rejected, as residents united to deliver the message: “Water is more precious than gold. United we will succeed!”