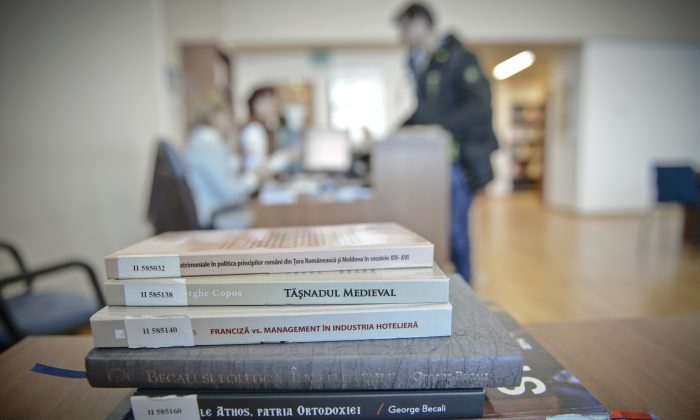 In this photo taken on Thursday, Jan. 14, 2016, books written by inmates and published while serving jail time are placed on a table at the National Library in Bucharest, Romania. Romanias crackdown on corruption and fraud in recent years has created a sudden and unexpected literary boom, as prisoners publish hundreds of non-fiction books on subjects as varied as soccer, real estate, God and gemstones. (AP Photo)
Europe

BUCHAREST, Romania—Romania’s crackdown on corruption and fraud in recent years has created a sudden and unexpected literary boom, as prisoners publish hundreds of non-fiction books on subjects as varied as soccer, real estate, God and gemstones.

It’s quite a feat for inmates with no access to books or the Internet, often without tables in their cells. Reports that one book, of 212 pages, was written in seven hours, has only increased suspicions that the improbable treatises are often ghost-written or plagiarized.

Under Romanian law, prisoners can have their sentences reduced by 30 days for every “scientific work” they publish, subject to a judge’s decision on whether the book merits it. Prisoners pay publishing houses to print their works — though they won’t be found in any bookshop.

The law dates from the communist era and was aimed at imprisoned intellectuals who were not suitable for manual labor. Skilled manual workers are able to work to reduce their sentences.

Prosecutors are investigating whether rich and well-connected convicts are paying university professors — who are required to approve the subjects of the books — or others to write them for them.

Laura Stefan, an analyst at the Expert Forum think tank, which promotes transparency and good governance, says the “scientific works” coming out of Romania’s jails have more to do with the wealth and influence of the inmates than their literary talent.

“What we are seeing … is the result of high-level people ending up in jail. These very powerful people are also rich and they can afford to have high-quality counsel, lawyers who teach them how to use the legislation,” she told The Associated Press.

“The quality of the work is poor, and some are bluntly copied.”

Allegations of plagiarism against ministers and high-ranking figures are commonplace in Romania, yet rarely investigated. A university panel in 2012 found that former Prime Minister Victor Ponta plagiarized his 2003 doctoral thesis,

Justice Minister Raluca Pruna has called for the law to be abolished in an emergency ordinance.

“I noticed a very large growth (in publications) in a very short space of time,” Pruna told the AP. “It was clear the procedure had not been applied in a strict manner.”

She favors new legislation that would put writing a book on a par with activities such as painting and theater, which would together be taken into consideration when ruling on early release.

The books are generally highly specialized or full of photos and short on text and would pass unnoticed were it not for the high-profile authors — including former Prime Minister Adrian Nastase, a football club owner and a TV mogul— or the fact they were apparently penned on a prison bed.

Nastase, who published prolifically before he served two prison sentences for corruption, wrote two bookswhile in jail. He declined to be interviewed for this article.

However, graphic artist Marina Popovici, one of those sentenced alongside Nastase in 2012 for money-laundering and complicity to abuse of the public interest, praised the law and said it gave well-educatedprisoners something productive to do.

“As a person who was active, I wanted to do something so as not to waste my time,” she said, clutching herbook, “Precious Colored Gemstones.” She said she was given supervised access to a computer and insisted she wrote the book herself. Freed in 2015, she claims she was wrongly convicted and is appealing at the European Court of Human Rights.

Journalist and former senator Sorin Rosca Stanescu served nine months of a 2½-year sentence he was handed for using privileged information and setting up an organized crime group. He wrote three books on the Romanian press and Romania’s political life and now teaches classes about corruption plaguing the Romanian press. He also insists he wrote his own books.

But it’s hardly surprising that in such difficult conditions — prisoners rely on family and friends to photocopy pages from reference books and don’t have desks in their cells — and with most convicts first-time authors, there are suspicions some prisoners simply hired others to write for them.

Steaua football club owner Gigi Becali recently admitted that he didn’t write the four books that came out under his name on subjects ranging from Mount Athos to “merciful love and redemption.” The former European Parliament lawmaker was sentenced to 3½ years prison in May 2013 for a land exchange deal, kidnapping and match fixing. He did not respond to messages requesting an interview.

“It’s not right to reduce someone’s sentence based on a book they may not have written. They should write, but not get their sentence reduced because of it,” she said.