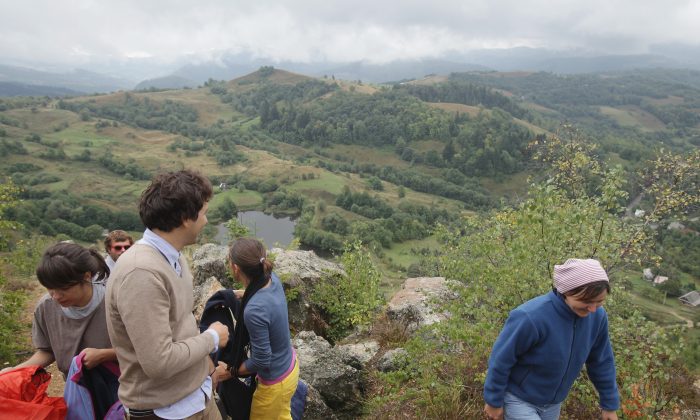 Hikers look out over the Corna Valley as they stand on Carnic mountain at the Rosia Montana gold mine site on Sept. 12 in Romania. Carnic mountain is one of four in the immediate area that are rich in gold and silver deposits, and that Rosia Montana Gold Corporation, which is majority-owned by the Canadian company Gabriel Resources, is seeking to exploit. (Sean Gallup/Getty Images)
Opinion

Mountains in danger of disappearing and hazardous wastes byproducts would result

A generation ago, the Romanian township of Rosia was primarily known for its hiking trails and ancient caves. Today, it is the intended site of Europe’s largest and most environmentally destructive mine.

For over a decade, the project designed by Canada-based Gabriel Resources Ltd., lacked a green light from Parliament, but a few weeks ago the Romanian government approved a draft bill that, if passed, would effectively commence the bulldozing.

If permitted, the company will conduct a highly destructive form of mining that would level four whole mountains and accumulate 200 million tons of hazardous waste material.

The mine has very few supporters, mostly owing to the fact that the annual use of 14,000 tons of cyanide is a key component of Gabriel Resources’ business plan to extract the mountains’ gold and silver deposits.

This sort of mining is not without precedent in Romania, nor without incident. In January 2000, the waste storage containers of another gold mining company burst, resulting in the worst European environmental disaster since Chernobyl.

On Sept. 8, protesters took to the streets of Bucharest and other Romanian cities in vast quantities. Though the estimates vary according to source, all put the number in the thousands. If the anti-mine movement continues in this manner, it would constitute the most significant popular movement in Romania since the 1989 revolution.

Clearly the carrying out of this mine as intended would almost surely result in a massive environmental calamity. As global citizens and human beings, let us do all in our power to prevent it.

Jack Feinberg lived in Bucharest during 2012–13 and is a regular contributor to the Romanian newspaper Dilema Veche.