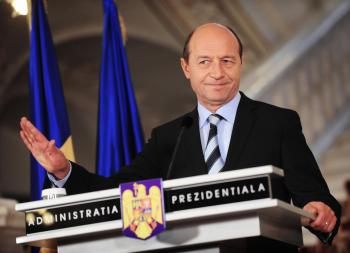 By Mihut Savu
biggersmaller
Print
BUCHAREST, Romania—Romania has less to worry than other nations during the economic crisis, President Traian Basescu recently declared, emphasizing that focus should instead be on the modernization of the country.

Basescu spoke during the official 150th anniversary celebrations of the founding of Romania, in a ceremony held in the Eastern city of Focsani. In 1859, the countries Moldavia and Wallachia united to form a single sovereign state.

The president's remarks appear to follow a trend initiated two weeks ago, when he proposed modifying the constitution to reduce the number of chambers in parliament (forming a unicameral legislature), and to eliminate legal immunity for parliament members. Parliamentary immunity has obstructed legal proceedings against officials faced with serious corruption charges in the past.

He also added that, in his view, in case of amendments to the constitution, Romania should go to a parliamentary republic with semi-presidential governance, which would increase the number and importance of the President's prerogatives.