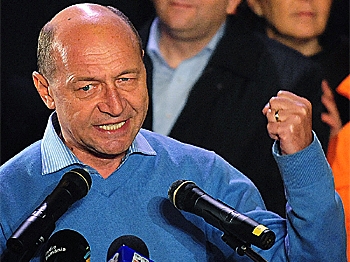 Romanian Diaspora May Have Tipped the Scale in Presidential Vote

Gina Neagu
View profile
Follow
biggersmaller
Print
BUCHAREST, Romania—The Romanian election was a nail-biter, but with the results now final it appears that voters in North America may have handed incumbent Traian Basescu another five-year term.

In a reverse of what pollsters predicted, Basescu won the vote by a margin of less than 1 percent—50.3 to 49.7 percent—over leftist leader Mircea Geoana. Three out of four local research institutes had predicted on Sunday evening that Social Democrat Geoana would win 51 percent and Traian Basescu 49 percent. Voter turnout was 57.94 percent.

The turnaround in favor of center-right Basescu may have been a result of the Diaspora vote. Of the 294 polling stations abroad more than 147,600 Romanian citizens abroad voted. Most of the Romanian Diaspora in Canada and the U.S. consider Basescu to be the only alternative to oppose leftists.

President Traian Basescu had specifically addressed overseas voters on his social networking homepage, Twitter.com, "Given how close the situation is in the country, Romanians in the U.S. and Canada may decide the president.”

According to the Central Electoral Bureau (BEC), the turnout outside Romania was record high.

Results May Be Contested

On election night, Basescu told voters via OTV television. "The result from BEC should be accepted by all. Official polls will be 51 [for me] or so to 48 or so.”

He also said, "I will not accept any rejection of the results after BEC has completed counting the votes." He accused two other stations, Antena TV and Reality TV, of mischief by spreading accusations that he would call people into the streets.

"I made an appeal for calm," said Basescu.

Earlier on Election Day, Basescu had claimed the exit polls were deceptive. "You will see the manipulations on the television stations … Today you can trust me fully when I tell you I won," he said on television.

Asked who will govern Romania if he wins, Basescu replied, "I assure you that Romania will be governed by a strong government, approved by Parliament.”

The opposition said they planned to contest the election results claiming they have proof of fraud, reported Reuters.

The election race was marked by accusations and smearing. Geoana was exposed for being too close to the Russian government. A mass-media scandal erupted when it was revealed that he attended secret meetings with Russian high officials before the presidential campaign.

The left then reacted with a slander campaign, accusing the incumbent Basescu of a variety of transgressions, and also posting a video clip in which Basescu allegedly slapped a child.

For many Romanians, Russia is still the “big brother” that forcibly brought communism and enforced it by military might after World War II.

Basescu was the only leader popular enough to mount a credible fight against the former communist forces that were ruling Romania under different umbrellas after the fall of Ceausescu in 1989. He is perceived as oriented toward NATO, U.S.A., and Europe and is often accused of being tough. He is credited as being the first Eastern-bloc president to publicly condemn the crimes committed under communism, a move that got him into trouble in a country where certain sectors still hold a strong communist ideology.

Romania joined the EU in 2007, which was followed by a wave of migrant workers looking for jobs in Europe, particularly in Latin countries such as Spain and Italy.

The trend added to the already massive number of highly educated Romanians that left Romania in 1990 under Ion Iliescu who ruled with a neo-communist agenda marked by unemployment and endemic corruption.

Since the ruling coalition fell apart two months ago, Romania has suffered from political instability and rising unemployment. Romanians are seeking to unlock a $2 billion bailout loan from the International Monetary Fund to pull it out of its deep recession.

Basescu, 58, had seen his popularity drop this year due to the economic and political issues, but still enjoys support. He declared that he will modernize and reform Romania, saying that an important part of the economic sector is under the control of corrupt oligarchs and media moguls.