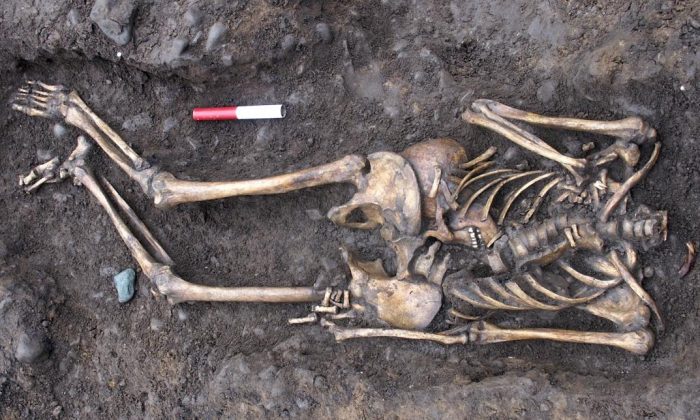 The DNA from seven Roman-era skeletons found in York, England indicate the Roman Empire included both locals and immigrants.

Six of the skulls contained DNA matching people living in modern-day Wales, Trinity College Dublin geneticist Dan Bradley and his colleagues said in a paper published this week in the Nature Communications journal.

That wasn’t too surprising, but the researchers were interested to find that the seventh skull’s DNA matched from the modern-day Middle East.

“The nearest genetic matches were from Palestine or Saudi Arabia,” Bradley told National Geographic. “He definitely didn’t come from Europe.”

The results came from DNA preserved in dense inner ear bones, and were confirmed with analysis of chemical signatures in the skeleton’s teeth.

“This Near Eastern chap really, really stands out. He was from somewhere arid and hot,” said Gundula Müldner of the University of Reading, who performed the chemical analysis. “Where he fits best is the Nile Valley or an environment like that—we can’t pinpoint it exactly, but somewhere in the Near East.”

Experts said the latest findings may be the first DNA evidence of the Roman Empire’s cosmopolitan character, showing how even non-elite Romans traveled great distances.

“It confirms the cosmopolitan character of the Roman Empire even at its most northerly extent,” said professor Matthew Collins, of the BioArCh research facility in the Department of Archaeology at York, who co-ordinated the scientific analysis, in a statement.

“This is the first refined genomic evidence for far-reaching ancient mobility and also the first snapshot of British genomes in the early centuries AD, indicating continuity with an Iron Age sample before the migrations of the Anglo-Saxon period.”

Previous analysis of the skeletons indicated that they may have been gladiators or soldiers, and that some of the men grew up in colder climates, perhaps Germany or further east in continental Europe. It also showed that the men had poor childhood health and that many had brown eyes and black or brown hair, while one had blue eyes and blond hair.