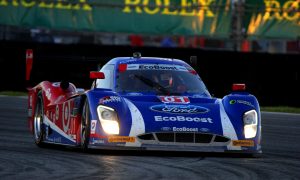 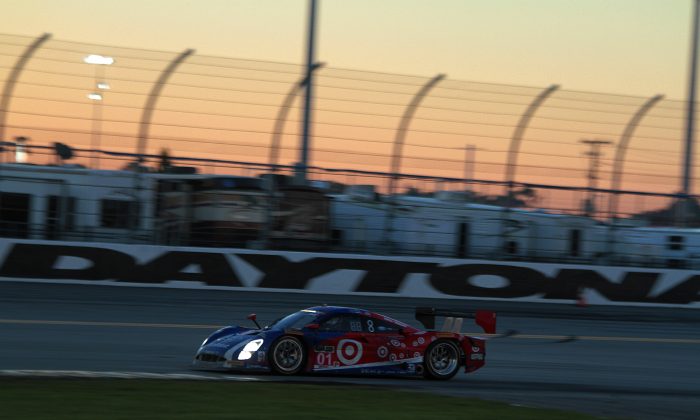 The Ganassi cars swapped the lead just before the 15th caution of the Tudor Championship Rolex 24, 18 hours into the race. (Chris Jasurek/Epoch times)
Motorsports

DAYTONA BEACH, Fla.—The sun has risen over the banking at Daytona International Speedway, revealing to the waking fans which cars have survived the night. The remaining cars competing in the Tudor United SportsCar Championship Rolex 24 are taped, scraped, scratched and covered in rubber dust—but if they are still running—or can be made to run—their teams will begin preparing for the final six hours, which is when the real racing begins.

One car which will not be participating in the final battle is the #17 Falken Tire Porsche, the last undamaged Porsche in the race. After the factory Porsches collided with each other during the dark hours, the Falken car was Porsche’s last hope to defend Porsche’s 2014 Rolex win. There was reason to hope—the Falken car was fast and completely undamaged.

Endurance racing is full of whiplash reversals though, and just before the 18th hour, that whip came down on Team Falken. The Porsche’s engine exploded without warning, likely ending the team’s race and certainly killing any hope of a win or podium finish.

The Falken disaster brought out the 15th caution period of the race, which shook up the running order as several teams ducked into the pits for a quick fill-up and service.

The crew of Joao Barbosa in the #5 Action Express Coyote-Corvette threw down a lightning-fast pit stop and got their car out in the lead, up from fourth, displacing Jordan Taylor in the #10 WTR Dallara-Corvette. Right behind this pair came the Ganassi boys, Tony Kanaan in the #02 and Scott Pruett in the #01.

The lead trio were within three-tenths of a second on lap 560 with Scott Pruett another six seconds back but working his way forward.

When the Falken Porsche dropped out the lead devolved to Corvette Racing’s Oliver Gavin—until Turn Five after the restart.
On the restart Oliver Gavin in the GTLM-leading #4 Corvette didn’t have room to brake entering Turn Five and tagged a PC car, cutting the Corvette’s left front tire and bent some bodywork, forcing a pit stop and giving the lead to Bruno Spengler in the #25 BMW.

Spengler completely messed up the Bus Stop, tearing up a bunch of sod and also some bodywork. Spengler’s contretemps gives the GTLM lead to Ryan Briscoe in the #3 Corvette.

In PC Jon Bennett in the #54 Core Oreca maintained his multi-lap lead, the only class leader which had a moment to breath. 64 Scuderia Corse

In GTD, Dominik Farnbacher in the #93 Riley Motorsports Dodge Viper led the class over Francisco Longo in the #64 Scuderia Corse Ferrari and Cooper MacNeil in the #22 AJP Porsche 911 GT America.