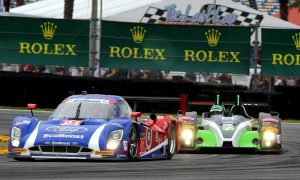 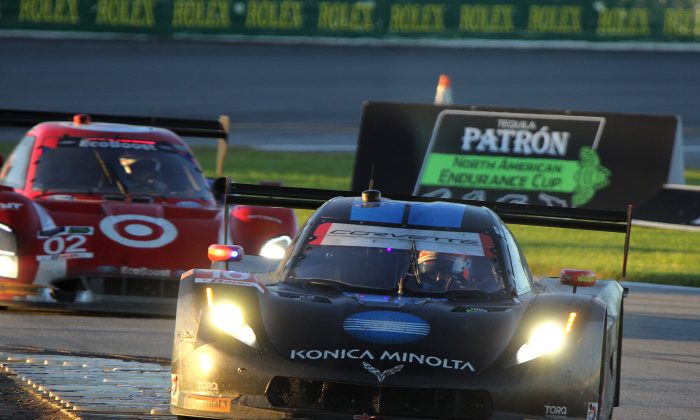 Max Angelelli in the #10 WTR Dallara-Corvette leads Tony Kanaan in the #02 Ganassi Riley-Ford Ecoboost through the Bus Stop as the Rolex 24 edges towards the finish. (Chris Jasurek/Epoch Times)
Motorsports

DAYTONA BEACH, Fla.—Attrition has thinned the field. The weaker cars and weaker teams have lost time and are now working just to finish. And at the head of each class are teams which can seriously contemplate winning. it is too soon to actually make a move, but the teams with a real chance know it is time to start panning.

There are a few teams with a real shot at the overall win.

Leading after 20 hours, having covered 613 laps is Jordan Taylor in the #10 Wayne Taylor Racing Dallara-Corvette. taylor, brother Ricky, and Max Angelelli have led frequently throughout the race, and have always been among the fastest few teams. A few early electrical problems with the traction control seemed to have been cured by the third stint; the car has run flawlessly since late afternoon.

Behind Taylor in=s Christian Fittipaldi in the #5 Action Express Coyote-Corvette. This team, the defending champions, have played it safe all race, staying near the front but infrequently fighting with other cars, biding time and saving resources.

The two Ford EcoBoost-powered Ganassi Rileys have been strong all race long, and have led about half the laps. The #02 had some trouble with a broken splitter which tore up some radiator plumbing, but the crew responded and the drivers gained back the lost time.

Scott Pruett in the #01 is a five-time Rolex winner; he wants another, and knows how to get it.

In GT Le Mans, Corvette runs one-two after a 15-hour battle with Porsche, BMW, and Ferrari. Engine failure and accident damage has slowed or stopped much of the competition, but the #25 BMW Team RLL Z4 GTE is a third of a lap back and could probably close the gap with a few really hard laps—which might be exactly what the team plans to do in the final hour.

Core Autosport has a lock on PC—probably. The team’s five -lap lead has shrunk to two as The PR1-Mathiason Oreca slowly increases pace. probably Jon Bennett and crew are managing the gap and saving energy for the final push, but with four hours left absolutely anything can happen.

GTD has also been a race-long battle between various manufacturers. As the race has progressed the Riley Viper seemed to be strongest, but not necessarily the quickest. The #22 Alex Job Racing Porsche 11 GT America came on strong in the later hours and reeled in the leading #33 Viper. Only a lap back, the #63 Scuderia Corse has the speed to catch and challenge the leaders.

With four hours left to race—longer than a regular Tudor race—and 20 hours gone, change is guaranteed. Drivers and crew get tired, metal fatigues. The track gets hotter, and so does the air, demanding new tire and engine-management adjustments. And all of the leaders have a plan ready to implement to deal with the vagaries or racing—yellow flags, spins, parts failures, or non-stop green-flag running. All of these plans call for a mad dash to the finish once the weaker teams have faded away.

Before long, the gloves come off, the swords are drawn, the metaphors are overused, but with each team going all-out for the finish line, no one will be paying attention to anything else.

The rest of the race is being broadcast on Fox Sports 1, with timing and scoring on IMSA.com.