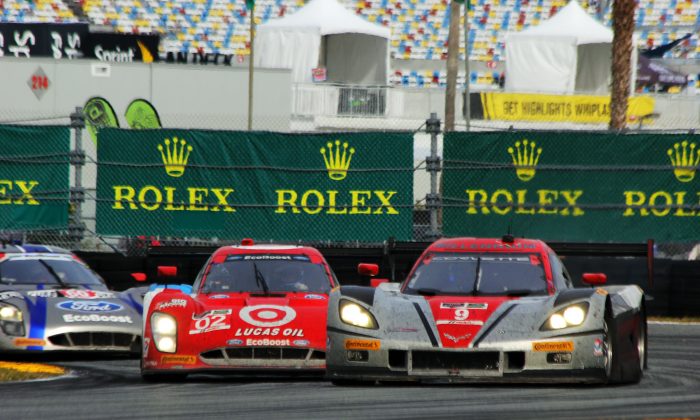 With two hours to go in the TUSC 52nd Rolex 24 at Daytona, the final shape of the race might be shaping up—at least the final battles.

Nothing is certain, of course. Mechanical fatigue has started to take its toll, knocking out front-runners and elevating underdogs, then eliminating those underdogs. The #7 Starworks LMPC Oreca fell afoul of mechanical fate as it burst into flames near Turn One while running second in class.

Driver fatigue is also playing its part. The latest victim was the #18 Muehlner Motorsports America Porsche which smacked the wall by Turn One.

The Starworks fire brought out the fifteenth caution in the race. The frequent cautions in the last few hours has made a hash of strategy; teams are having to recalculate constantly.

Tune in to watch the final frenetic hours on Fox Sports 1.

The race-long battle between the #10 Wayne Taylor Racing Dallara-Corvette and the two Action Express Coyote Corvettes continues to grow in intensity, with only 18 seconds separating the three cars.

Both Action Express cars are suffering shifter problems, which might slow down the cars in the final-stint sprint, or which might completely stop working at any time.

In GTLM, the #911 Porsche North America 911RSR seems to be safe, finally, as the #4 Corvette had to retire to the garages with a transmission failure. The crew is trying to replace the unit and get back out, but its quest for a class win is done.

This elevates the #55 BMW Team RLL Z4 to second in class, two laps behind the Porsche. Third in class is the #91 SRT Viper GTS-R, yet another lap back.

Running twelfth and 13th overall are the top two cars in the LMPC class: The #54 Core Autosport Oreca is two laps ahead of the #25 8Star car after the #7 Starworks car caught fire. This elevated the #38 Performance Tech Oreca, seven laps down.