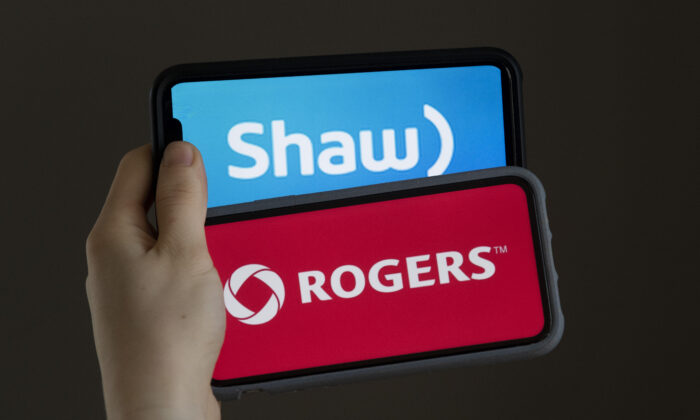 Shaw and Rogers signs are shown on two cellphones in this photo illustration, on March 29, 2021. (The Canadian Press/Adrian Wyld)
Canada

The Rogers service outage that began July 8 has renewed discussion on the company’s proposed merger with Shaw and whether more competition is needed in the Canadian telecom industry.

President and CEO Tony Staffieri issued a statement offering an apology for the outage, saying the company realizes the impact the incident had on people across the country.

“We know going a full day without connectivity has real impacts on our customers, and all Canadians. On behalf of all of us here at Rogers, Rogers for Business, Fido, Chatr and Cityfone, I want to sincerely apologize for this service interruption and the impact it is having on people from coast to coast to coast.”

The subsidiaries mentioned in the statement convey a history of previous Rogers acquisitions. In 2004, Rogers bought Fido for $1.4 billion, which was the first provider in Canada to offer a network with the global system for mobile communications (GSM) standard. The GSM standard, first launched as a commercial service in Finland in 1991, replaced the first-generation (1G) analog networks with 2G digital networks and by 2000 became the most widely used mobile communication standard in the world.

Rogers then bought Cityfone in 2010 for $26 million. Regarding Chatr, many of its customers were transferred from Mobilicity, a discount wireless company that Rogers bought for $465 million in 2015 before retiring the brand in 2016.

The outage came amid efforts by Rogers to secure the purchase of Shaw Communications for $26 billion. On July 6, the company announced in a news release that mediation did not convince Commissioner of Competition Matthew Boswell to approve the merger.

Peter Menzies, senior fellow with the Macdonald-Laurier Institute and former vice-chair of the CRTC, described the outage as “really unusual” and “really surprising” and said it will impact merger discussions and the wider debate on how best to regulate the industry.

“Should it stimulate a conversation? Well, it will, whether it should or shouldn’t. You’re probably going to have a political reaction of some kind, people saying this is just proof we need more competition,” Menzies said in an interview.

“One thing it was proof of was that Interac needs a backup plan because they didn’t have one. Nationally, one of the biggest issues was Interac not functioning.”

In a statement to The Epoch Times, Interac spokesperson Bryan Bossin acknowledged the “frustration” caused by the outage and said: “We apologize for the inconvenience this has caused. We are adding a supplier to strengthen our existing network redundancy so Canadians can continue to rely on Interac daily.”

‘Indirect Consequence of Lack of Competition’

Ian Lee, a professor of management at the Sprott School of Business at Carleton University, says a functioning system is not something Canadians can afford to be without, especially if use of cash becomes less common.

“If you’re going to take only electronic payments, then you must have that system up and running 100 percent of the time. You can’t have the excuses that Rogers has been giving us. It doesn’t cut it,” Lee told The Epoch Times.

“That should be a huge signal to the regulators that allowing this [merger with Shaw] to proceed is the worst possible thing that can happen. We’re going to reduce competition and thereby make the situation worse, not better. How can anyone claim that this is in the greater public interest of all Canadians? There’ll be less competition, which means they can charge higher prices.”

Lee draws parallels between protectionist policies for Canadian telecom to those in the airline industry. He says the approach is based on “badly flawed” and “monstrously foolish” arguments that doing so is better for domestic culture, jobs, and consumers.

“Competition would enhance the quality of the service in both telecom and airlines. We would have more choices at somewhat lower prices. … We have some of the highest cellphone fees in the world,” Lee said.

“This has been studied to death for over 100 years in economics. Oligopolistic industries are less competitive, charge higher prices, and offer lower quality services than an industry that is highly competitive.”

He believes the Rogers outage is only the latest exhibit for this economic principle.

“There clearly were failures, whether it was a underinvestment in the IT, or whether it was a management failure, or they weren’t recruiting enough people. This was internal to Rogers. This was a Rogers strategic mistake, and I would argue this is an indirect consequence of a lack of competition.”

Menzies says competition has merits, but with telecom “it’s complicated.”

“[Former prime minister] Stephen Harper always insisted that you needed four players in every market, and I don’t think he’s wrong,” he said.

“[Saskatchewan] has four strong competitors, one of whom is [SaskTel], the incumbent Crown corporation that has close to 70 percent of the market.”

Menzies says he believes that, at the national level, the CRTC could have navigated a better course to foster more networks while encouraging competition, but protectionism limits the range of ways to do so.

“Canada’s always been worried about foreign competition, so that’s one of the biggest barriers in terms of competition and price,” he said.

“There’s a credible school of thought that says once you did that, companies like Bell and Rogers, who aren’t very big on a global scale, would get swallowed up pretty quickly. And then people can debate whether that would be a good thing or a bad thing.”

“It really illustrates that the government should be spending a little bit more time thinking about the larger issues in terms of the internet, like making sure there is one, and maybe a little less time fussing about who says what on it, and how much Canadian content it carries and how,” he said.

“The internet is much more than what we’ve been talking about in public, and it really is the backbone of industry and everything else these days. Hopefully this will help draw people’s attention to some of those bigger issues.”