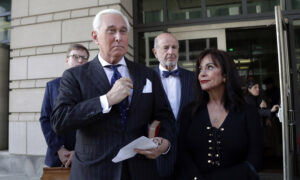 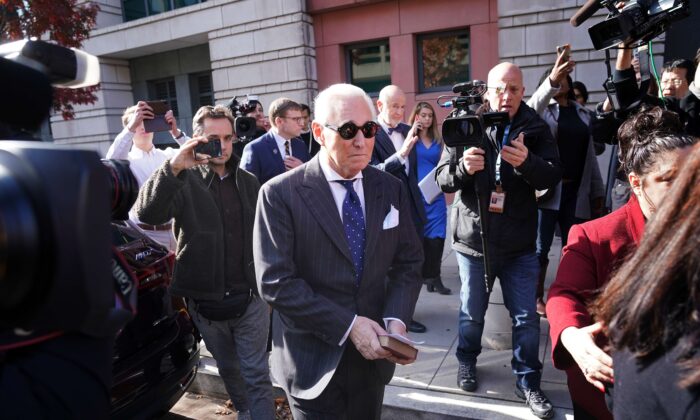 Former adviser to President Donald Trump, Roger Stone, leaves the E. Barrett Prettyman United States Courthouse after being found guilty of obstructing a congressional investigation into Russia’s interference in the 2016 election, in Washington on Nov. 15, 2019. (Win McNamee/Getty Images)
US News

The foreperson of the jury that convicted former Donald Trump campaign adviser Roger Stone showed clear animus against Trump in a slew of social media posts that surfaced after she identified herself as the foreperson while issuing a defense of government prosecutors who withdrew from the case this week.

Tomeka Hart said on Feb. 12 that she led the jury that convicted Stone on seven counts of witness tampering, obstruction of a congressional investigation, and lying to Congress in 2019. Hart said she wanted to speak out following four prosecutors’ withdrawal from the case after the Department of Justice issued revised sentencing recommendations to federal Judge Amy Berman Jackson.

“I want to stand up for Aaron Zelinsky, Adam Jed, Michael Marando, and Jonathan Kravis—the prosecutors on the Roger Stone trial,” Hart wrote on Facebook. She said she was pained to see the Department of Justice “interfere with the hard work of the prosecutors,” who “acted with the utmost intelligence, integrity, and respect for our system of justice.”

“The prosecutors who have now resigned did a masterful job of laying out every element of every charge, backed with ample evidence,” Hart wrote. “As foreperson, I made sure we went through every element, or every charge, matching the evidence presented in the case that led us to return a conviction of guilty on all 7 counts.

Hart said she initially kept silent for her own safety and decided to remain silent “out of fear of politicizing the matter.”

“But I can’t keep quiet any longer,” she added.

“Quick question for the #KlanPresident and the 64% of Republicans who agree with his remarks and behavior over… https://t.co/HSObN7kZbL

After Hart identified herself as the head juror, people began reviewing her social media posts.

The posts show animus against Trump, including showing Hart’s belief in the theory that Trump and his campaign colluded with Russian actors to win the 2016 election. Special counsel Robert Mueller’s team couldn’t establish any conspiracy or cooperation between Trump or his campaign and Russia.

In one Twitter post in 2017, Hart shared a quote calling Trump “the #KlanPresident,” apparently referencing the white supremacist Ku Klux Klan group. The quote was from filmmaker Ava DuVernay.

In another Twitter post that year, Hart wrote that she marched with others past Trump’s hotel in Washington. “Marched by 45’s hotel…and the crowd went booooo!!! Then yelled shame, shame, shame as we walked by!”

In a Twitter post in 2018, Hart praised an official of UnidosUS, formerly the National Council of La Raza, for “firing us up and calling us to act against the oppressive, racist agenda of 45’s admin.” And she said that Trump supporters were racist for “co-signing and defending a racist and his racist rhetoric.”

In January 2019, Hart shared a Twitter post from CNN analyst Bakari Sellers that was about Roger Stone. Stone “has ya’ll talking about reviewing use of force guidelines,” Sellers wrote after FBI agents conducted a pre-dawn raid on Stone’s house that was captured by CNN cameras. Sellers listed a number of people who hadn’t prompted talk about the guidelines. “But Roger Stone!!! Think about that,” he wrote.

On Nov. 15, 2019, the day Hart and fellow jurors voted to convict Stone, Hart posted a tweet containing four emojis: two hearts and two fist-pumps. A Facebook post she linked to in the tweet was deleted.

Hart was a former member of the Memphis schools board. She also ran for Congress in 2012 as a Democrat. She lost to incumbent Rep. Steve Cohen (D-Tenn.).

Hart’s tweets came to light the same day that Jackson, the judge who will sentence Stone on Feb. 20, unsealed an order she gave last week denying a request from Stone for a new trial.

Stone argued that a juror served on the jury despite being biased against him. Jackson said Stone failed to establish “inherent bias.”

The case has received widespread attention in recent days, sparked by the four prosecutors Hart defended asking Jackson to sentence Stone to seven to nine years in prison. The Department of Justice filed a revised sentencing memorandum the next day, arguing that the recommendation “could be considered excessive and unwarranted.”

Department leaders still want Stone to serve jail time but the sentence should be “far less” than the original recommendation, the filing stated. The four prosecutors then withdrew from the case, with one resigning from the department altogether.