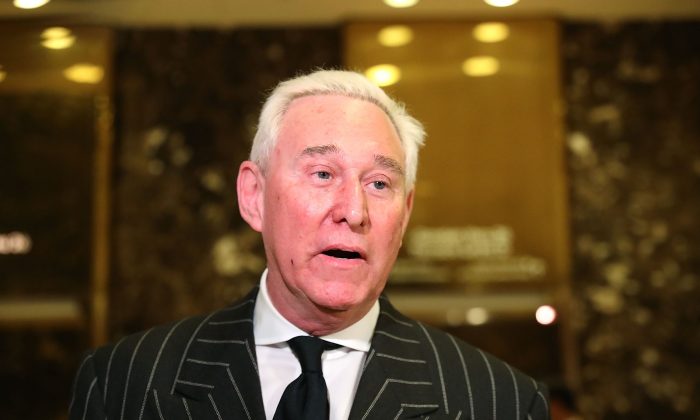 Roger Stone speaks to the media at Trump Tower on Dec. 6, 2016 in New York City. Potential members of President-elect Donald Trump's cabinet have been meeting with him and his transition team over the last few weeks. (Spencer Platt/Getty Images)
Politics

Roger Stone Claims He Was Poisoned, May Have Been Polonium

A longtime political operative and Donald Trump confidant has claimed he was poisoned with “what may have been polonium or had the characteristics of polonium”—the same substance used to kill a former Russian secret service agent who fled his home country.

Roger Stone, who frequently appears on Alex Jones’ InfoWars, told Jones that “I became extremely ill. This manifested itself in over 14 days of high fever, delirium, night sweats, I had lesions on my chest and my face.”

Stone added, “The conjecture of all the doctors was that I did not receive a large enough dose to kill me, but I have never been this ill.”

“The general consensus is I was poisoned. I was poisoned with polonium or a substance that has the characteristics of polonium and this made me exceedingly ill,” he explained his theory that it was to prevent him from proving wrong allegations made by intelligence of Russian hacking during the election. “This is about stopping the Trump agenda,” he said, according to a Mediaite transcript. “I would blow the whistle on this whole bogus Russian narrative that they just won’t let go of.”

Polonium is a rare yet highly radioactive chemical element, reportedly used to kill Russian spy Alexander Litvinenko in 2008. There’s been speculation that Litvinenko ingested the substance after it was slipped into his cup of tea. His death sparked a lengthy investigation in the U.K., where he died and had sought asylum. In 2007, he wrote a Daily Mail opinion piece saying he believes the Russian government wanted him dead.

At the same time, Stone is also pushing a new book, “The Making of the President 2016: How Donald Trump Orchestrated a Revolution,” which will come out on Jan. 31.

On social media, some accused Stone of faking his poisoning claims to sell his latest book.

Yes, I believe I was poisoned to stop me from exposing the “Russian Hacking” LIE b4 the Congressional Investigation @StoneColdTruth

On Stone’s Twitter page, he prominently features his book. In a recent post, he wrote: “Why did the Deep State want to KILL my book ? I expose the CIA’s Russian hacking canard.” It also includes a picture of it.

He’s best known as a political operative and opposition researcher, namely for Republicans. In 2016, Stone was banned on CNN and MSNBC for Twitter posts that criticized television personalities.

Meanwhile, Sen. Ted Cruz, as he was campaigning against Trump in the primary in 2016, described Stone as a “man who has 50 years of dirty tricks behind him” and is a “henchman and dirty trickster” after unsubstantiated claims emerged about Cruz’s personal life.

And after Nixon won the 1972 presidential election, Stone worked for the administration in the Office of Economic Opportunity.