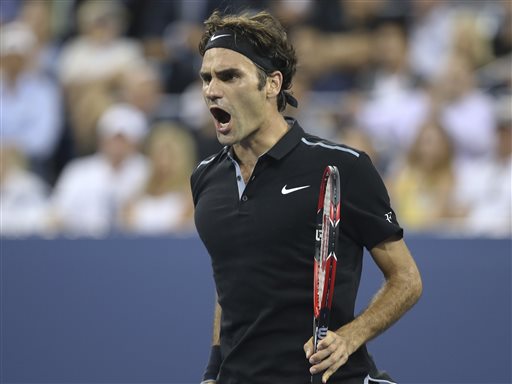 Roger Federer takes on Marin Cilic in the US Open semifinals on Saturday.

The match is slated to start at 1:30 p.m. EDT in Flushing Meadows in the Queens borough of New York City. The game was pushed back due to the length of Kei Nishikori’s win over Novak Djokovic. It should start soon.

The match will be broadcast on CBS in the United States and Eurosport in Europe.

Other broadcasters include Sky Sports in the United Kingdom, TSN2 in Canada, Ten Sports in the Indian subcontinent, WOWOW in Japan, CCTV in China, ESPN International in Mexico, Central America, the Caribbean and South America; and Fox Sports in Australia.

Live streaming will be available via CBS, Eurosport, and Tennis TV, as well as through most of the broadcasters.

Cilic of Croatia, the No. 14 seed in the tournament, took out No. 6 Tomas Berdych in the quarterfinals, 6-2, 6-4, 7-6. Cilic’s quarterfinal win was notably the quickest out of the four matches.

Federer and Cilic have played five times before, with Federer winning all the matches.

Marin Cilic, of Croatia, reacts after defeating Tomas Berdych, of the Czech Republic, during the quarterfinals of the 2014 U.S. Open tennis tournament, Thursday, Sept. 4, 2014, in New York. (AP Photo/Julio Cortez)

What to watch at US Open: What if coaches played?

NEW YORK—Imagine, just for fun, if the four big-name coaches working with the U.S. Open men’s semifinalists were to play Saturday’s matches instead of their charges.

So Roger Federer vs. Marin Cilic would be Stefan Edberg vs. Goran Ivanisevic, and Novak Djokovic vs. Kei Nishikori would be Boris Becker vs. Michael Chang.

Each of those coaches won at least one Grand Slam title; Edberg, Becker and Chang are in the International Tennis Hall of Fame.

“In their prime, you could certainly make a case for all of them. The court is really quick and three of the four were attacking players; Michael’s more of a counter-puncher. If they’re all in their prime, it’s really a great matchup,” said U.S. Davis Cup captain Jim Courier, himself a member of the Hall of Fame.

“Becker was such a big-match player. He won here once. Edberg won here twice. It’s a tough question. It depends on the time of their career.”

OK, and what about if they got out on the court now?

“As of today, I’m taking Goran all day long. Goran’s in good shape and he still serves Mach-12. Michael plays very well. Stefan moves very well, but his serve is a little more hittable. And Boris’ hips are real bad; he had surgery. And his left elbow is a little roughed up,” Courier said. “It would be a fun one. I’d pay to see it.”

Well, tennis fans will simply have to settle for the real matchups Saturday: No. 1 Djokovic against No. 10 Nishikori, followed by No. 2 Federer against No. 14 Cilic.

It’s the 18th consecutive Grand Slam tournament at which at least half of the sport’s so-called “Big 4” — Federer, Djokovic, Rafael Nadal and Andy Murray — reached the semifinals. That quartet has won 36 of the past 38 major championships, too.

Here’s what to watch on Day 13 at Flushing Meadows:

DJOKOVIC VS. NISHIKORI: They’ve split their only two past meetings, but last played each other three years ago. Djokovic, who counts the 2011 U.S. Open among his seven major trophies, has a decided advantage in experience: He’s playing in his 24th Grand Slam semifinal, including eight in a row in New York. Nishikori, meanwhile, has never been this far at one of the sport’s four most important events.

Djokovic also has not nearly as much wear and tear over the past two weeks, dropping only one set along the way. Nishikori, trying to become the first Japanese man in a Grand Slam final, played 10 sets over more than 8 1/2 hours in his past two victories, over No. 5 Milos Raonic in the fourth round and No. 3 Stan Wawrinka in the quarterfinals.

FEDERER VS. CILIC: Federer leads 5-0 head to head, but he needed to save six match points in the second set in the most recent one, on a hard court in Toronto last month.

“That’s maybe exactly the kind of matches I needed to win,” said Federer, who already owns a record 17 Grand Slam titles, including five at the U.S. Open.

Cilic will be participating in his second major semifinal and first since 2010; he’s the first man from Croatia to make it that far at Flushing Meadows since Ivanisevic in 1996.

Cliic missed last year’s U.S. Open while serving a doping suspension that later was reduced to four months on appeal.

“I feel,” Cilic said, “I’m playing probably the best tennis of my career.”