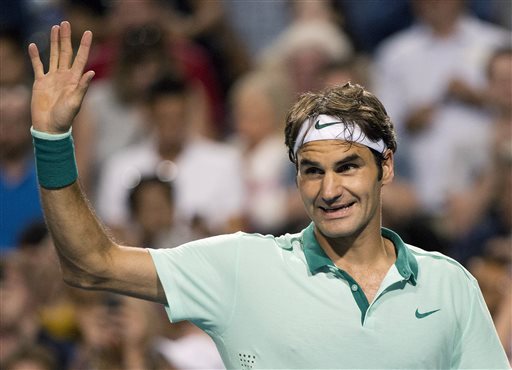 Roger Federer and Jo Wilfried Tsonga are set to face off in the Rogers Cup ATP final in Toronto on Sunday.

It will be broadcast on ESPN 2 in the United States and CBC in Canada.

Live streaming will be available through Watch ESPN and CBC.

Federer of Switzerland, the No. 2 seed in the tournament the ranked No. 3 in the world, bested unranked Feliciano Lopez 6-3, 6-4 in the semifinals.

Tsonga of France, the No. 13 seed in the tournament and ranked in the world, continued his stellar play in the Rogers Cup by taking out No. 6 Grigor Dimitrov in the semifinals, 6-4, 6-3.

Tsonga previously eliminated No. 8 Andy Murray and No. 1 Novak Djokovic.

Tsonga and Federer have played 15 times spanning back to 2008. Federer has the upper hand in the head to head, with a 11-5 record. Federer has won both matches between the two this year–in the fourth round of the Australian Open and and in the quarterfinals of the Monte-Carlo Rolex Masters.

Tsonga and Federer met twice last year, with each winning once, and Tsonga won the only meeting in 2012.

Tsonga expressed confidence after taking out Dimitrov on Friday.

“I’m more consistent and it’s good because it (helped) me beat three guys in the top 10,” Tsonga said. “I didn’t do that (for a) couple of years now and it gives me hope for the rest of the year.”

“When you play against Roger, it’s always special,” Tsonga said. “First, because you play in a big area, in a big stadium anyway. And every time the crowd is for him, so it’s quite a good sensation. It’s quite a good feeling when you win against 10,000 people.”

It will be Tsonga’s first appearance in a Masters 1000 final since he lost to Federer three years ago at the BNP Paribas Masters. Tsonga’s only Masters 1000 title came in Paris in 2008.