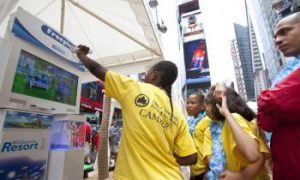 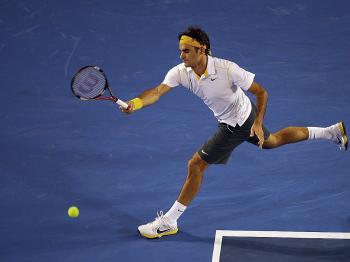 WORKING FOR THE WIN: Roger Federer plays a forehand in his second-round match against Gilles Simon at the 2011 Australian Open. (Mark Dadswell/Getty Images)
Sports

Federer won the first two sets in dominant fashion, then gave up the next two to Simon, who had beat the #2-ranked Swiss player in their only two prior meetings in 2008. Federer finally pulled it out in the fifth set.

Federer praised Simon after the match. “It was a tough match; it showed what a great mover [Simon] is, what a great return player he is, and how he hung in there and believed,” Federer told ESPN. “It’s great to play against him I really enjoyed myself out here tonight.”

Simon broke Federer three times in the third set; Simon used flat, fast forehands to cut down Federer, who lost control of his backhand, sending the shot floating long or hanging up high.

The match was undecided until the middle of the fifth set. Federer’s 165-match record of never losing after winning the first two sets seemed in jeopardy. The Swiss player had not been knocked out of a tournament in the third round since the French Open of 2003; this time it seemed he might not make the third round.

In the sixth game of the set, Simon serving, Federer drew Simon to the net with a short return, then blasted a volley past him to break serve. This tilted the momentum to Federer.

Simon did not go quietly; in the eighth game the Frenchman defended three match points before winning the game. But Federer was re-invigorated by the break; he was moving like it was the first set, running down ever shot Simon sent his way. Federer finally won with an ace in the ninth game, advancing out of the third round.

“I wasn’t playing badly, to lose the third and fourth set; Gilles really took it to me,” Federer said. “But I remained positive, and said, ‘I’ve worked hard my entire life; it’s going to pay off;’ and today I got lucky. I ‘m happy I won and I’m still in the tournament.”