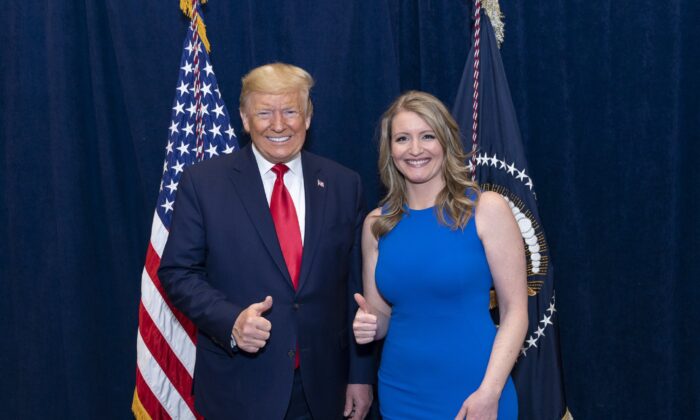 Jenna Ellis told The Epoch Times in an interview on June 24 that Friday’s ruling on Roe v. Wade shows how Trump’s Supreme Court nominations and federal-judicial appointments will be the 45th president’s “most critical point and enduring legacy” in his first term and “will have a lasting impact.”

“I was able to call President Trump this morning and tell him from the bottom of my heart, ‘Thank you so much for having the courage to stand by each of these justices,’” Ellis said. “It was a hard-fought battle for each of them.”

“He stood by them. And he knew that they were the right people for the job. And without his courage, and his decision-making and appointing these justices, we wouldn’t be here as a country today,” she added.

“I told him: thank you so much for having the courage to stand firm for life, for liberty, and for our Constitution.”

Ellis said Roe v. Wade, a decision reflecting “judicial activism at its core,” could not have been overturned if Trump had not facilitated a conservative majority in the Supreme Court.

“The Dobbs case had been pending—in our American understanding—really, since Roe v. Wade was handed down, but the composition of the Supreme Court just couldn’t get there until President Donald Trump,” Ellis said.

During Trump’s presidency, the former president nominated Justices Brett Kavanaugh, Neil Gorsuch, and Amy Coney Barrett to the Supreme Court. All three justices concurred in the highest court’s judgment with Justice Alito, who described Roe as “egregiously wrong and deeply damaging” to America and said that “the Constitution does not confer a right to abortion.”

“This is why it is so incredibly important to have a conservative majority on the Supreme Court and conservatives—not Democrats or Republicans, but conservatives—in every branch of government, from the federal to the state and the local level,” Ellis said.

“We’re seeing that not only with the Dobbs case, but also the Second Amendment case, and others that are starting to turn the country back towards actually implementing and preserving our highest law of the land: the United States Constitution,” Ellis added.

Likewise, Trump celebrated the Dobbs decision on social media Friday, saying that it was his “great honor” to elect “Constitutionalist” justices.

“Today’s decision, which is the biggest WIN for LIFE in a generation, along with other decisions that have been announced recently, were only made possible because I delivered everything as promised, including nominating and getting three highly respected and strong Constitutionalists confirmed to the United States Supreme Court,” Trump said in a statement published on Truth Social on June 24.

“These major Victories prove that even though the Radical Left is doing everything in their power to destroy our Country, your Rights are being protected, the Country is being defended, and there is still hope and time to Save America!” the former president said.

“I will never stop fighting for the Great People of our Nation!”

Ellis argued that it is “fundamentally American” for states and the American people—not any federal or judicial bodies—to regulate abortion.

“Having the states regulate abortion is absolutely consistent with originalism and with the principles of limited and separate powers,” Ellis said. “[Congress] is limited in what they can legislate on, pursuant to Article I, Section 8 … the Ninth and Tenth Amendments go hand in hand with that, saying all powers not specifically given to the federal government are reserved to the states or to the people.

“So we have a very clear delineation of specific limited power and authority on the federal level and the state level, and no power is given to the judicial branch in any context to legislate,” she explained.

Ellis said the issue of abortion—which she calls a question of “truth and morality”—is now left up to the individual states, many of which have laws banning abortion immediately coming into effect following Roe’s overturn or have legislated on the issue so as to able to pass similar abortion-restricting laws in the near future.

“This battle now will go back to the states,” Ellis said. “We’re seeing the greatest pro-life generation rising up with the advancement of medical technology. We’re seeing that people understand that life begins at conception and that human beings are human beings with the same inherent dignity and worth, no matter how small.

Beyond the legal considerations, Ellis added that those who perceive an inherent value in life—Christians and faith-based individuals alike—should advocate for morality in society, in accordance with what James Madison discussed as the concept of “self-regulation” in The Federalist Papers.

“We can, and we should, have abortion illegal. But we should strive to make abortion unthinkable,” she said. “[If] we as individuals understand and respect that life does begin at conception and that human beings are made in the image of God and have inherent dignity and worth from the moment of conception, all the way until natural death—then we will respect life and it won’t be the government forcing that upon us.”

“As President Trump told me today on the phone, ‘This is a big, beautiful day in America,’ and I love how he framed that,” said Ellis.