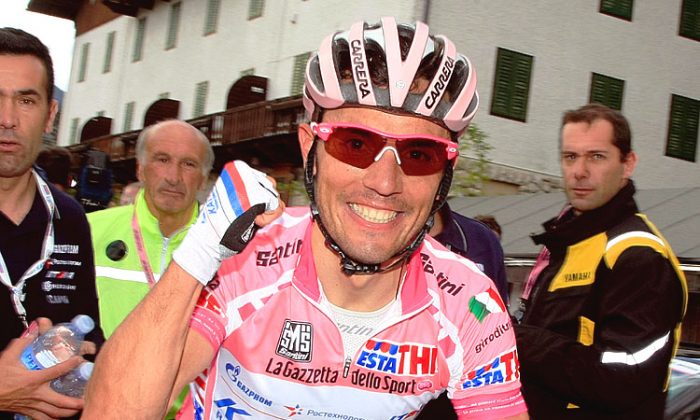 Race leader Joaquin Rodriguez eked out a win in a surprisingly competitive mountain stage of the Giro d’Italia, which saw only six riders in the leading peloton.

None of the eClassification contenders were able to gain any time on the Katusha rider, but several lost a lot: Astana’s Paolo Tiralongo and Roman Kreuziger cracked on the final climb and are essentially out of the race, as are Ag2R’s John Gadret and Lampre’s Damiano Cunego.

The Katusha rider dedicated his win to his late friend Xavier Tondo, killed in a freak accident in 2011.

“Today was a very special day for me,” Rodríguez told velonation.com. “Xavi Tondo died one year ago, a great friend of mine; I knew him not only from our professional career, but since I was a child. “So, today I really wanted to take this victory and finally I did, and obviously it’s dedicated to him.

“It was a very hard stage,” Rodriguez continued. “Liquigas-Cannondale put in a huge amount of work, and if they’re going to keep this pace on Friday and Saturday too, it won’t be easy for me or anybody else to resist and stay ahead. Every single day is dangerous for us; today, just like many of the others, I had cramps in my leg, so I don’t think we can handle this pace during next stages.

Rodriguez made a somewhat surprising observation. “I think Ryder Hesjedal is the great favorite,” he said. “Today he was able to not lose any seconds, and if the gaps will stay like this Scarponi, Basso and I won’t have any chance against him in the Milan TT. So, we have to attack him and try to drop him, otherwise he will win this race for sure.”

Most teams probably planned to save their climbing legs for the two enormous-finishing stages on Friday and Saturday. Stage 17 had four huge climbs but finished with a long descent which could have allowed stragglers to catch up.

Surprisingly Euskaltel attacked on the second climb of the day, forcing the GC leaders to respond. In response Liquigas rider Ivan Basso raised the pace until only the three riders could match it, though two more caught up on the descent.

Rodriguez won the final sprint. Only the top finishers: Rodriguez, Basso, Ryder Hesjedal, and Michele Scarponi, have a real chance to win overall.

A group of five riders: Branislau Samoilau (Movistar,) Matteo Rabottini (Farnese Vini,) Kevin Seeldraeyers (Astana,) Jose Serpa (Androni Giocattoli,) and Matteo Montaguti (Ag2r-La Mondiale)—escaped after 45 kilometers. Most of the peloton seemed content to let this group go, but Euskaltel, inspired by their Stage 16 win, decided to real in the break enough to bridge across to it.

The Basque team attacked on the slopes of the second climb, and cut the gap from six minutes to a minute-and-a-half with 60 km to go, when Amets Txurruka led Mikel Nieve on an attempt to reach the break.

Nieve never made it; all the breakaway riders were caught within 20 kilometers as Liquigas decided not to let up after the Euskaltel attack. The peloton was down to two dozen riders cresting the Cat 2 Forcella Staulanza.

Ryder Hesjedal launched one probing attack which was quickly covered; for the rest of the climb the leading six marked each other and tried to match the pace pushed by Ivan Basso. Because Basso is a rhythm climber who doesn’t do well with sudden hard accelerations, he kept the pace high enough to discourage attacks.

Finally 500 meters from the crest of the climb Domenico Pozzovivo attacked, imediatley driopping Scarponi and Uran.

Pozzovivo looked very strong on the attack; had the little Colnago rider moved earlier he might have destroyed the competition and won the stage. Instead he just made everyone—particularly Michele Scarponi—work extra hard on the descent.

The Lampre rider took huge chances to catch up to the leaders, a task made more difficult by a cramp in his right thigh. Scarponi made it back just two kilometers from the finish.

The six were together under the 1-km kite and past the 500-meter mark. With 350 meters to go Michele Scarponi started his sprint, but   slight incline of the road, this was too far. Ivan Basso caught him up, but Joaquim Rodriguez, had saved his energy while following on the climbs so he could use it all now. The Katusha rider passed basso to win his second stage of the 2012 Giro.

Stage 18 will be a final show for the sprinters, whichever of them might be left. Sky’s Mark Cavendish is all but guaranteed to win here; all his top-tier competitors have withdrawn. The stage is short, only 139 km from San Vito Cadore to Vedelago, and downhill most of the way. This will be almost another rest day for the climbers, and they will need it.

Stage 19 starts with a Cat 3, followed by two Cat 1s, a Cat 2, and a Cat 1 mountaintop finish. As Rodriguez said, everyone will have to attack here to gain an advantage for the final time trial. Many of the riders who are two or three minutes down might try to gain back some time here, which will put even more pressure on the GC leaders.

Stage 20 is worse. Opening with along cat 2 climb, it follows with a pair of Cat 3s and a Cat 1, the legendary Mortirolo, and finishes with 45 kilometers of climbing peaking at the even more famous Hors Categorie Passo Dello Selvio..