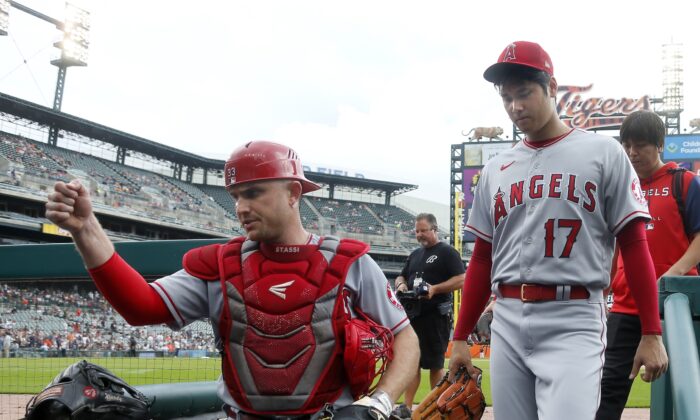 Shohei Ohtani #17 and catcher Max Stassi #33 of the Los Angeles Angels walk into the dugout before a game against the Detroit Tigers at Comerica Park in Detroit, on August 21, 2022. (Duane Burleson/Getty Images)
Baseball

DETROIT—Eduardo Rodriguez pitched five shutout innings in his return to the Tigers, helping Detroit to a 4–0 win over the Los Angeles Angels on Aug. 21.

The Tigers’ Riley Greene had a 448-foot homer on the first pitch he saw from Angels starter Shohei Ohtani (10–8); the longest home run Ohtani has allowed in the majors, one that went over the out-of-town scoreboard in right-centerfield. Greene ended up reaching base four times.

Ohtani left the game with a stomach virus after four innings, in which he allowed three runs on five hits and four walks.

Rodriguez (2–3) hadn’t pitched in the majors since suffering a rib-cage injury on May 18. He left the team after a June 9 rehab assignment to deal with family issues, and was on the restricted list until Friday.

Detroit’s pitchers held the Angels scoreless in the final 15 innings of the series. Los Angeles had two on and two out in the third, but Greene made a diving catch in center to rob Luis Rengifo of at least one RBI.

Ohtani retired the first two batters in the fourth, but walked Akil Baddoo and Greene before Victor Reyes made it 3–0 with a triple. Kody Clemens increased the lead to 4–0 in the fifth with an RBI double off Jimmy Herget.

Tigers 2B Jonathan Schoop missed the game after spraining his right ankle in Saturday’s win. Tigers manager A.J. Hinch said Schoop could be placed on the injured list if he’s not able to play by Tuesday.

Tigers: Off Monday, then host the San Francisco Giants for two games, with Drew Hutchison (1–6, 4.23) expected to start Tuesday for the Tigers against Carlos Rodon (11–6, 2.89).