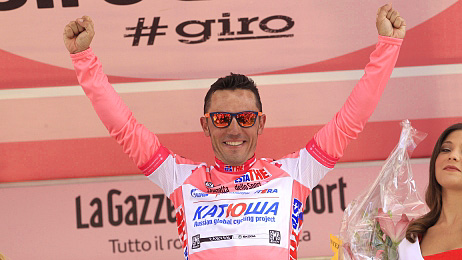 Katusha’s Joaquim Rodriguez showed his climbing strength on the torturous double uphill finish of Stage 10 of the Giro d’Italia, attacking in the final few hundred meters to take both the stage win and the leader’s pink jersey.

Rabobank’s Thomas Slagter made a huge effort, leading much of the first climb and much of the second, while Katusha’s Daniel Moreno led Rodriguez up the second ascent, with Garmin’s Ryder Hesjedal and Sky’s Sergio Henao near the front.

Slagter attacked halfway up the final climb, with Rodriguez and NetApp’s Bartosz Huzarski in tow. Three hundred meters out, Rodriguez made his move, dropping Slagter while Movistar’s Giovanni Visconti made a late charge to take third.

“Big thanks to Moreno for those last kilometers of the race,” Rodriguez told Eurosport. “Today I knew we could try and go—it was going to be a spectacular finish. It’s so important for me to do what I can here for the stage victory and also for the bonuses.”