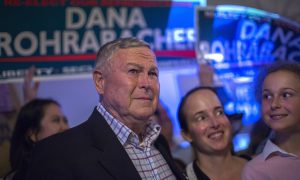 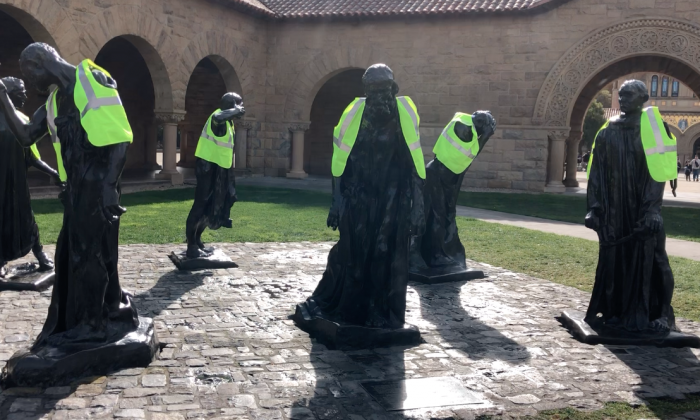 The group of statues called the Burghers of Calais, wearing yellow vests, on the campus of Stanford University in Palo Alto, Calif. on Jan. 7, 2018. (anonymous)
Northern California

PALO ALTO, Calif.—On the morning of Jan. 7, a mysterious protest took place on the campus of Stanford University, perhaps connected to the inauguration of California’s new governor, Gavin Newsom.

Six famous sculptures by Auguste Rodin in Stanford University’s Memorial Court were adorned in yellow vests, at the same time that Newsom was making his inauguration speech in the state capitol. The statues are symbols of civic virtue.

Californians started seeing yellow vests in December, when activists of the New California state movement began wearing the vests “in solidarity with French citizens” against socialism and globalism.

The group of sculptures at Stanford, called The Burghers of Calais, were commissioned by the city of Calais in 1884 and were completed in 1889. The sculptures have been symbols of the university in its Memorial Court, where there originally stood a statue honoring the Stanford Family.

The slaying of Newman, California, police Corporal Ronil Singh by an illegal immigrant the day after Christmas caused a strong reaction around the nation to the state’s sanctuary policy.

Yellow vest-wearing activists in the New California state movement issued a grievance Jan. 1 that described the state’s sanctuary policy as “acts of insurrection against U.S. Constitution” and urged President Donald Trump to take proper action to stop the policy.

California’s strict environmental policies have been widely criticized for preventing the state from building water reservoirs, and driving prices higher for vehicles and construction.

During Newsom’s inauguration ceremony, yellow-vested protesters were seen outside the State Capitol building.

The Burghers of Calais sculptures memorialized the six citizens who saved the French city Calais during the Hundred Years War between France and England. In 1347, after 11 months of siege by England’s Edward III, starvation forced the French city to parley for surrender. Edward offered to spare the people of the city if six of its leaders walked out with the keys to the city, and wearing ropes around their necks ready to be hanged.

Rodin’s sculptures depict the six saviors with bare feet, and wearing ropes around their necks walking towards the English ruler. Rodin was celebrating the idea that heroic deeds may be performed by ordinary people.

So far no one on the Stanford campus has claimed credit for placing the yellow vests on the statues.

The New California movement is a statewide grassroots effort seeking to break most of California’s rural areas away from the current state, and to form a new state. So far, representatives of 47 of state’s 58 counties, as well as fractions of five other counties, have joined the movement.