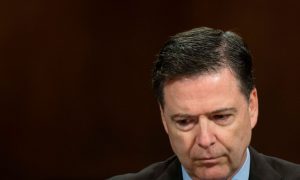 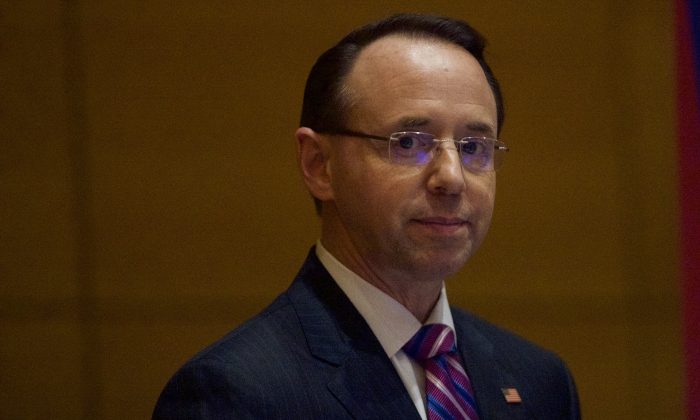 Inspector General (IG) Michael Horowitz’s report (pdf), which was released on Aug. 29, blasted Comey for violating DOJ and FBI policies guiding the retention, handling, and dissemination of government documents. Horowitz also found that although Comey didn’t disclose any classified information to the media, he did share a memo containing sensitive information to his lawyers. The FBI determined several weeks later that the memo contained information that was “confidential.”

Moreover, Horowitz also found that Comey had shared another memo containing “For Official Use Only” information to one of his lawyers and had instructed that lawyer to share that information with a reporter.

Horowitz then criticized Comey for failing “to live up to his responsibility” by disclosing government documents in violation of FBI policy.

“By not safeguarding sensitive information obtained during the course of his FBI employment, and by using it to create public pressure for official action, Comey set a dangerous example for the over 35,000 current FBI employees—and the many thousands more former FBI employees—who similarly have access to or knowledge of non-public information,” the report states.

Rosenstein took to Twitter to respond to the findings of Horowitz’s report and seemingly take aim at Comey, without mentioning him, by posting a quote from a letter he penned in June 2018 that cautioned against violating DOJ policy to achieve short-term results.

“It is important for the Department of Justice to follow established policies and procedures, especially when the stakes are high,” Rosenstein wrote in his letter, which was quoted in part in his post on Aug. 29.

“It is important .. to follow established policies and procedures, especially when the stakes are high…. We should be most on guard when we believe that our own uncomfortable .. circumstances justify ignoring .. principles respected by our predecessors.” https://t.co/rJNZ0Hr20k

“It may seem tempting to depart from Department policies and traditions in an effort to deflect short-term criticism, but such deviations ultimately may cause a loss of public confidence in the even-handed administration of justice,” his letter continued, adding that “we should be most on guard when we believe that our own uncomfortable present circumstances justify ignoring timeless principles respected by our predecessors.”

The quotes follow a paragraph in his letter that stated Comey felt “unique” and “unusual” circumstances justified his actions in leaking information to the public and Congress about the Hilary Clinton email investigation, and about the probe into Russia meddling in the 2016 presidential election.

Rosenstein’s Twitter post came after Comey responded to the IG report on Twitter, underscoring the fact Horowitz did not find evidence he had leaked classified information to the media. However, he did not address the fact that he instructed his lawyer to pass sensitive information made in the course of his work in the FBI to the media.

“DOJ IG ‘found no evidence that Comey or his attorneys released any of the classified information contained in any of the memos to members of the media,’” Comey wrote. “I don’t need a public apology from those who defamed me, but a quick message with a ‘sorry we lied about you’ would be nice.”

“And to all those who’ve spent two years talking about me ‘going to jail’ or being a ‘liar and a leaker’—ask yourselves why you still trust people who gave you bad info for so long, including the president.”

Following Rosenstein’s post, two political commentators responded, one of them accusing him of double standards while also taking the chance to attack President Donald Trump.

“You speak up about Comey failing to ‘follow established policies and procedures’ but stood silent beside Barr when he misled the public about Trump,” CNN legal analyst Renato Mariotti wrote.

“It’s even more important for a president not to corruptly use his power to try to quash investigations of him and his friends,” he added.

It’s even more important for a president not to corruptly use his power to try to quash investigations of him and his friends.

You speak up about Comey failing to “follow established policies and procedures” but stood silently beside Barr when he misled the public about Trump. https://t.co/pfFJsAY0zw

Rosenstein responded: “Notice how this pundit completely misses the point and thereby illustrates it.”

Notice how this pundit completely misses the point and thereby illustrates it. https://t.co/wOQKVaCzC6

“Asinine. Comey did what he did because the president was actively trying to dismantle DOJ’s normal way of operating. The AG [Jeff Sessions] and the DAG [Rod Rosenstein] were both complicit, so Comey had no where else to take his concerns. It must be nice to live in the context-free world inhabited by the IG.”

Rosenstein replied: “Another pundit illustrates my point: In 2016, he agreed policy violations ‘should trouble anyone who believes in the rule of law and fundamental principles of fairness.’ Many employees dislike supervisors, but most keep faith with government institutions.” He also shared in his post Miller’s own 2016 Washington Post op-ed, “James Comey’s abuse of power.”