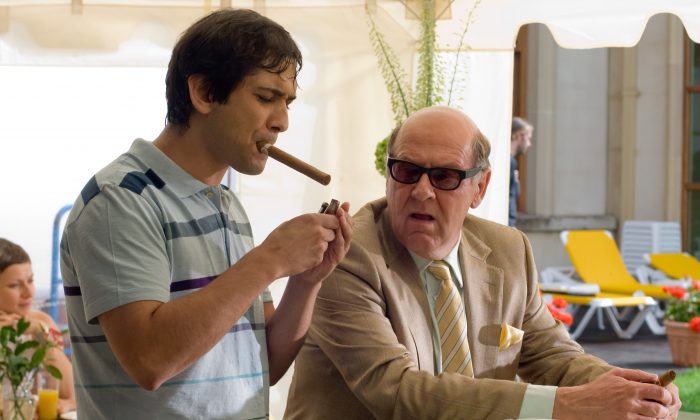 RocknRolla (or how Guy Ritchie returns to form after the vanity affair Swept Away and the self-indulgent Revolver) sees Ritchie back to doing what he does best: cock-er-nee crime capers.

Set in contemporary and changing London, RocknRolla concerns itself with the shady dealings behind the ever-growing industry of real estate. With his crooked fingers in control of the buying, selling and scamming, Lenny Cole (Tom Wilkinson, clearly enjoying a chance to cut loose as a xenophobic crime boss) is the mobster to see if you wanna get on the ladder. Entering into a dodgy deal that swiftly goes south, small-time “Babbling Brooks” One Two (the uber-masculine Gerard Butler – 300) and Mumbles (Idris Elba, relocating his infectious gangsta shtick from The Wire’s Baltimore streets to Rolla’s London ones) are left seriously out of and in Lenny’s “Lucy Locket”.

Enter Stella (an impressive Thandie Newton) who offers them a simple smash ‘n’ grab job that will net ‘em more than enough “Bees and Honey” to pay Lenny back. ‘Course what One Two and Mumbles don’t realise is that they are fleecing London’s latest Russian billionaire racketeer, Uri Obomavich (rent-an-Eastern European Karel Roden), a man that doesn’t take too kindly to his roubles being robbed. So set in motion is a showdown between the various levels of London’s underworld.

Of course, like Ritchie’s previous forays into the cockney crime genre, RocknRolla has ‘nuff subplots and characters to fill several films over. So mixed into the main mess is the wrongly assumed dead, drug-addicted rock star that the title refers to, Johnny Quid (star-in-waiting, Toby Kebbell), a sideways search for the grass that put most of the main “Chevy Chases” away for a stretch, and a stolen painting that Lenny’s assistant Archie (best-thing-in-the-flick Mark Strong) is desperately in search of.

These various plot threads all come to a satisfactory head in the final 15 minutes, but there’s a lot of fun to be had along the way as well. Undoubtedly Ritchie’s funniest film thus far, RocknRolla is also arguably his best. Yes, he’s essentially transposed all the best bits of Lock, Stock… and Snatch, put an updated twist on them, cast a new generation of geezas and cut out all the wannabe existential tosh that he tried on in Revolver. But what this does is make for one great whole movie, rather than a good movie with some great moments. Or a plain “pen-and-inker” one.

What the arresting visuals, (less than usual) tricksy editing, over-convoluted story, guttermouth dialogue, cockney rhyming slang, perfectly cast… erm, cast and slapstick scenes of violence won’t do is win over any Guy Ritchie detractors. What they will do though is appease and please pre-existing ones and just maybe bring in a few newbies as well. And with the end titles informing us that all of RocknRolla’s best characters will be back for another adventure, it’s acceptable to get excited again by the prospect of another Ritchie release. That’s something we wouldn’t have thought possible a few years ago, so bravo.