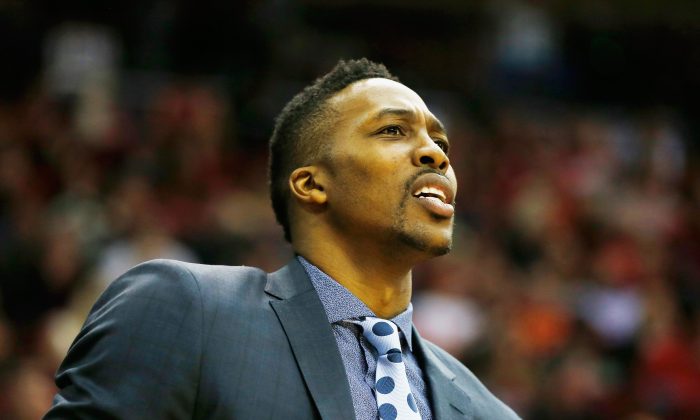 Dwight Howard #12 of the Houston Rockets stands near his team during their game against the Los Angeles Clippers at the Toyota Center on November 28, 2014 in Houston, Texas. (Photo by Scott Halleran/Getty Images)
NBA

The Houston Rockets had a tough loss on Wednesday but the news and rumors keep ramping up as the team prepares for another game.

Howard Aims to Return on Saturday

Dwight Howard has now missed 10 straight games but has a return in sight.

Coach Kevin McHale initially said that the center would be back sometime this week, but that timetable was revised a couple days later.

Now Howard says he hopes to return on Saturday at home against the Denver Nuggets.

“That’s the plan,” Howard told ESPN. “I don’t want to put a date on it, but that might be the best time. We’ll have a couple days of practice after [Thursday’s game against Sacramento], and I should be ready to go.”

Howard said it’s been tough to be out for so long.

“It’s very frustrating. But the one thing that’s kind of a blessing is the other guys are playing really great basketball and it’s only going to strengthen our group,” he said.

“It’s a testament to everything that’s been going on all summer. Guys worked hard this summer. We’ve really stepped up on defense. That was the one thing we all said after last year, ‘We’ve got to play defense now. It can’t be one or two people, it has to be the whole team.'”

Howard could have been out a shorter time but he and the team opted for the platelet-rich plasma therapy, which takes longer but ensures a better recovery.

“The problem was my cartilage was wearing down, and it’s been wearing down because I’ve been playing basketball for a very long time,” the 29-year-old told USA Today.

“When you have the bone rubbing on bone, it brings a lot of pain. Every step, every movement I would make, there was just a lot of pain. I wasn’t going to put myself and my teammates through that by just trying to play through that. It was something that needed to go away in order for me to be where I wanted to be as a player, to be who my teammates needed me to be every night. So I’m happy that a lot of that stuff is going away. The best thing I can do now is just try and prevent it from happening again.”

Their returns are less certain at this point, particularly for Jones, who was starting before he went down.

James Harden is also struggling with injury, but played against the Warriors after being listed as questionable due to back spasms.

Tarik Black has been starting for Howard.

The Rockets are aggressively pursuing deals in which they can use the $8.4 million trade exception acquired in the Jeremy Lin trade, sources told Yahoo.

“Rival executives say that Houston’s front office has been active in searching out deals in recent days and wants an acquisition completed within the 60-day reaggregation window before the Feb. 19 NBA trade deadline,” it said. “This way, the Rockets could still have an option of moving the player again this season.”

Two unnamed teams thought they had deals forming with the Rockets, but then sensed that general manager Daryl Morey is working to find better deals.

The Rockets want to get the best player possible but also want to acquire a wing and/or frontcourt players.

Houston has until early July to use the exception but has imposed its own deadline as December 19.

Bleacher Report notes that top candidates for the win include Corey Brewer of the Minnesota Timberwolves, who has been linked specifically to the Rockets, and Jeff Green of the Boston Celtics.

More modest targets include Andrew Nicholson of the Orlando Magic and Jonas Jerebko of the Detroit Pistons.