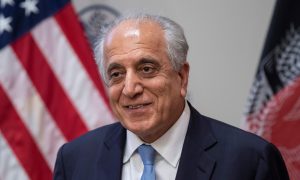 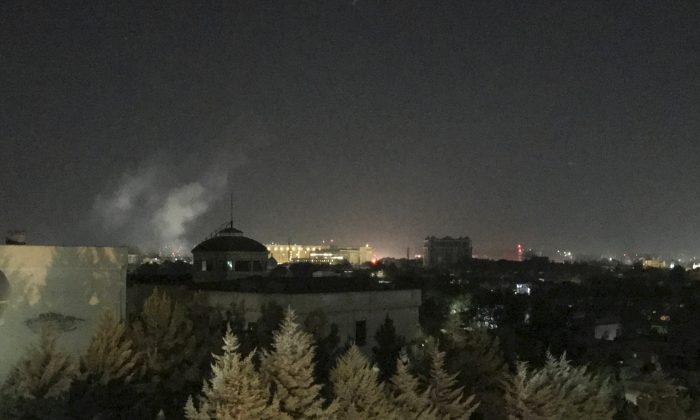 A plume of smoke rises near the U.S. Embassy in Kabul, Afghanistan on Wednesday, Sept. 11, 2019. A blast was heard shortly after midnight on the anniversary of the 9/11 attacks. (AP Photo/Cara Anna)
US News

Rocket Explodes at US Embassy in Afghanistan on 9/11 Anniversary: Report

A rocket exploded at the US Embassy in Afghanistan, reported the Associated Press, on the anniversary of the 9/11 attacks.

The sound of sirens followed the explosion that rocked central Kabul where the compound is located, according to AP, as a plume of smoke rose over the capital at around midnight.

“An explosion caused by a rocket has occurred on the compound,” a message relayed to employees inside the embassy, where officials gave the all-clear about an hour later.

There were no injuries reported.

A car bomb attack last week in the capital that killed a U.S. service member prompted President Donald Trump to call off secret talks he was planning to conduct with Afghan President Ashraf Ghani and Taliban leaders at Camp David.

“They thought that they had to kill people to put themselves in a little better negotiating position,” Trump told White House reporters on Monday, Sept. 9, calling the attack “a big mistake.”

“As far as I’m concerned,” Trump said in reference to the talks, “they are dead.”

The Taliban regime that had sheltered 9/11-mastermind Osama Bin Laden was ousted by U.S.-led military forces in 2001 but was never fully routed, maintaining a foothold in Afghanistan for 18 years.

Now about 14,000 U.S. troops remain int he country. Trump has called it “ridiculous” that they are still in Afghanistan after so many years and so many billions of dollars have been spent.

The decision to hold the talks, as well as to pull out of them, was ultimately made by Trump, according to Secretary of State Mike Pompeo.

“President Trump ultimately made the decision,” Pompeo said, according to Reuters. “He said, ‘I want to talk to (President) Ashraf Ghani. I want to talk to these Taliban negotiators. I want to look them in the eye. I want to see if we can get to the final outcome we needed.’”

Pompeo said the United States won’t release the pressure until the Taliban is serious about peace.

“If the Taliban don’t behave, if they don’t deliver on the commitments that they’ve made to us now for weeks, and in some cases months, the president is not going to reduce the pressure, we’re not going to reduce our support for the Afghan security forces that have fought so hard there in Afghanistan,” Pompeo said, according to the news agency.