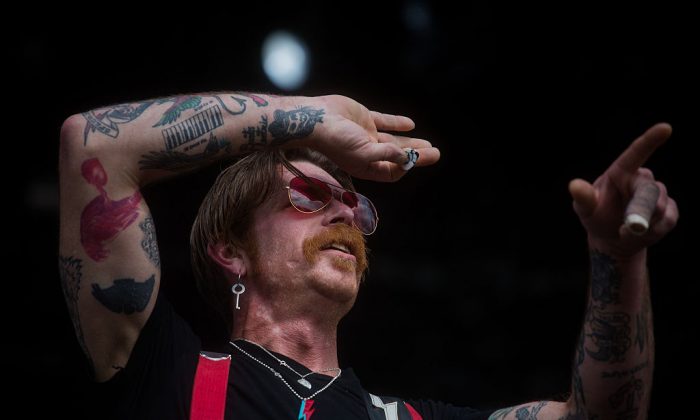 A rocker who survived the terror attack in Paris that left 130 people dead said that the people who attended March for Our Lives over the weekend were exploiting the victims of the school shooting in Florida last month that left 17 people dead.

Jesse Hughes, 45, is the frontman for Eagles of Death Metal.

His band performed at the Bataclan theater in 2015 when 89 people were killed and hundreds of others were injured by radical Islamic terrorists. Others were shot and killed elsewhere in Paris.

“Obviously … The best thing to do to combat chronic abusers and disregarders of the law (like the law against Murder) is to … pass another Law,” Hughes wrote in a series of Instagram posts that were later deleted, reported Rolling Stone. “But before we pass this law we’re going to denigrate the memory and curse ourselves by exploiting the death of 16 of our fellow students for a few Facebook likes and some media attention.”

Hughes then referenced how he lived through a mass shooting.

“As the survivor of a mass shooting I can tell you from firsthand experience that all of you protesting and taking days off from school insult the memory of those who were killed and abuse and insult me and every other lover of liberty by your every action,” Hughes wrote.

Sunday’s protest attracted hundreds of thousands of people in Washington as well as numerous people in other cities across the nation.

Other members of Eagles of Death Metal haven’t commented on what Hughes wrote.

Some family members who had siblings, children, or relatives killed in the Marjory Stoneman attack voiced similar thoughts to Hughes.

Hey @Emma4Change please stop using my sister’s name to push your agenda, she DID NOT and WOULD NOT support it

Patrick Petty, whose sister Alaina was killed in the attack, slammed the students at the march via Twitter.

“Hey @Emma4Change please stop using my sister’s name to push your agenda, she DID NOT and WOULD NOT support it,” he said.

Meanwhile, Hunter Pollack, whose sister Meadow was killed at the school, wanted to speak at the march but wasn’t allowed.

He later released a video saying what he would have said at the march.