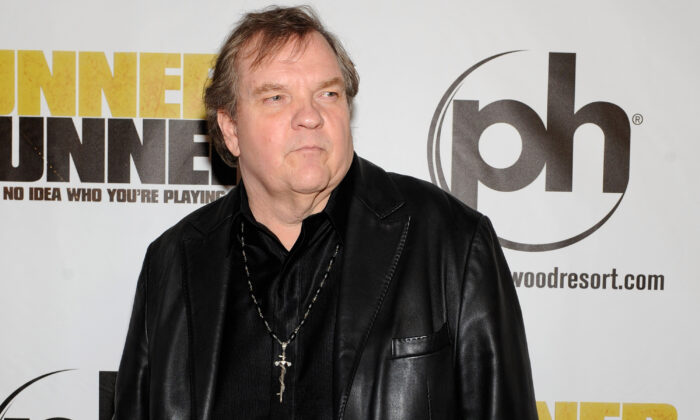 NEW YORK—Rocker singer Meat Loaf has died. He was 74.

The singer born Marvin Lee Aday died on Jan. 20, according to a family statement provided by his longtime agent Michael Greene.

“Our hearts are broken to announce that the incomparable Meat Loaf passed away tonight,” the statement said. “We know how much he meant to so many of you and we truly appreciate all of the love and support as we move through this time of grief in losing such an inspiring artist and beautiful man… From his heart to your souls…don’t ever stop rocking!”

No cause or other details were given, but Aday had numerous health scares over the years.

Friends and fans reacted to the death on social media.

“I hope paradise is as you remember it from the dashboard light, Meat Loaf,” actor Stephen Fry said on Twitter.

A native of Dallas, Aday was the son of a school teacher who raised him on her own after divorcing his alcoholic father, a police officer. Aday was singing and acting in high school (Mick Jagger was an early favorite, so was Ethel Merman) and attended Lubbock Christian College and what is now the University of North Texas. Among his more notable childhood memories: Seeing John F. Kennedy arrive at Love Field in Dallas on Nov. 22, 1963, then learning the president had been assassinated and driving to Parkland Hospital and watching a bloodied Jackie Kennedy step out of a car.

He was still a teenager when his mother died and when he acquired the nickname Meat Loaf, the alleged origins of which range from his weight to a favorite recipe of his mother’s. He left for Los Angeles after college and was soon fronting the band Meat Loaf Soul. For years, he alternated between music and the stage, recording briefly for Motown.

He is survived by Deborah Gillespie, his wife since 2007, and by daughters Pearl and Amanda Aday.