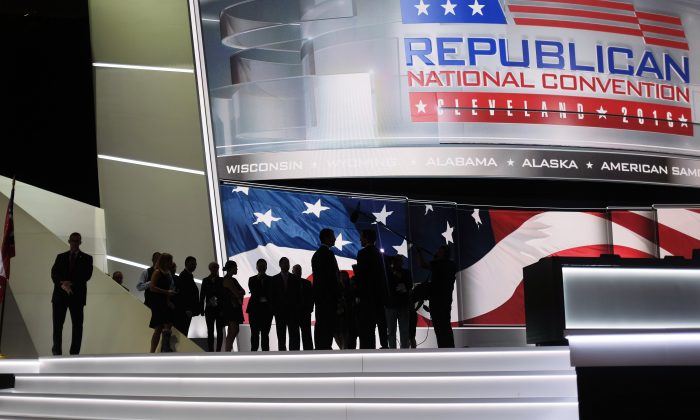 People watch an interview being filmed onstage on the second day of the Republican National Convention on July 19, 2016, in Cleveland, Ohio. (DOMINICK REUTER/AFP/Getty Images)
Entertainment

Donald Trump and Republicans must have not heard the first warning from rock band Queen.

The Republican campaign failed to obtain permission to use “We are the Champions” during the Republican National Convention (RNC) on July 18.

“An unauthorised use at the Republican Convention against our wishes – Queen,” read a tweet from the official account of the legendary band.

An unauthorised use at the Republican Convention against our wishes – Queen

This is the second time the classic rock band has called out Republicans for using the hit song. Guitarist Brian May said Trump wasn’t given permission to use the song for his speech following the primaries on June 7.

“This is not an official Queen statement, but I can confirm that permission to use the track was neither sought nor given. We are taking advice on what steps we can take to ensure this use does not continue,” said May.

“Regardless of our views on Mr Trump’s platform, it has always been against our policy to allow Queen music to be used as a political campaigning tool. Our music embodies our own dreams and beliefs, but it is for all who care to listen and enjoy.”

Trump has also had run-ins with other bands for using their music without consent. The Rolling Stones weren’t too keen on Trump using “Start Me Up” following his Indiana primary victory.

“The Rolling Stones have never given permission to the Trump campaign to use their songs and have requested that they cease all use immediately,” a spokesperson for the Rolling Stones told Time magazine.

The unauthorized use of music has been a common theme for the Republican party.

Former presidential candidate Mike Huckabee is shelling out $25,000 to Survivor after playing the band’s song “Eye of the Tiger” without permission on Sept. 8, 2015, according to CNN.

Frank Sullivan III of the band filed a lawsuit against Huckabee for copyright infringement last year. Guitarist Sullivan is the co-author of the song and his company, Rude Music, owns rights to the track.