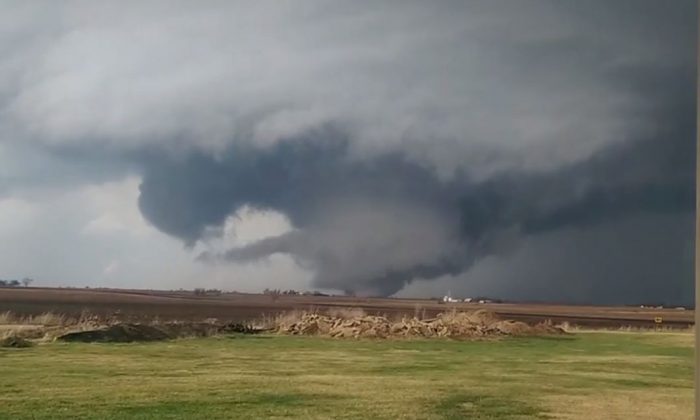 The town of Rochelle, located in Illinois about 75 miles from Chicago, was heavily damaged by a tornado on Thursday evening. The towns of Fairdale and Kirkland also suffered damage. At least one person was killed in the tornado and a number of homes were destroyed, according to local reports.

Photos and videos showed the large wedge-shaped twister, as seen below:

Early reports say considerable damage has been done in the area.

An ABC News reporter said on Twitter that Grubsteakers Restaurant in Rochelle was hit by the tornado and “crews working to rescue multiple people.”

Local reports also said there was damage done in Hillcrest, located about 80 miles from Chicago. There was no word of injuries or deaths in either Rochelle or Hillcrest.

There were also reports of tornadoes in Peoria, Illinois and Dewitt, Iowa.

Reports said that funnel clouds also were spotted close to Rockford, but he said they didn’t touch down.


Meanwhile, authorities say a tornado has touched down near the central Illinois community of Rochelle. Initial reports form the Ogle County Sheriff’s Department is that the funnel has caused considerable damage.

A sheriff’s dispatcher who would not give her name said a tornado also swept across the nearby town of Hillcrest late Thursday. There were no immediate reports of injuries.

Winnebago County Sheriff’s spokesman Ken DeCoster says funnel clouds were spotted near Rockford, but did not touch down. However, there were reports of damage in an area east of the city in the incorporated community of Fairdale.

Tornadoes were reported earlier Thursday near Peoria, but there were no immediate reports of damage.

A broad swath of the Midwest is being pummeled by hail, damaging winds and as a strong storm front rumbles through the Plains.