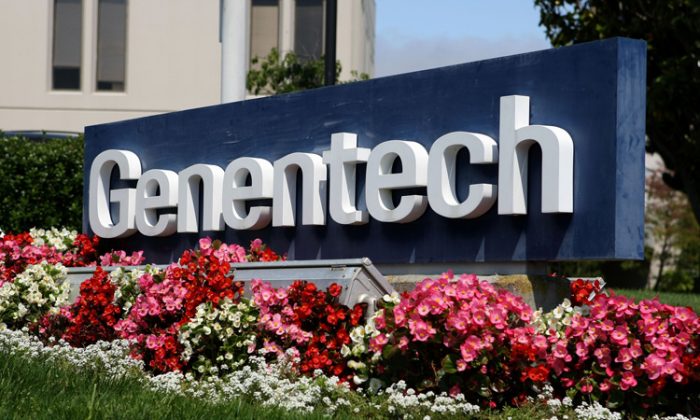 This 2008 file photo shows a sign in front of the San Francisco headquarters of Genentech, maker of the blockbuster cancer drug Avastin. Counterfeit Avastin was recently discovered being sold in the United States by a supplier not approved by the FDA. (Justin Sullivan/Getty Images)
Business

The proliferation of counterfeit medicine in the United States is becoming an increasing concern, and the recent discovery of a fake version of the commonly used cancer medicine Avastin has fanned the flames.

This instance included the distribution of a fake version of Roche Holding AG’s multimillion dollar Avastin, which is distinguished by its active ingredient bevacizumab. The fake drugs do not include this key ingredient.

Avastin is normally given intravenously in hospitals, clinics, and doctor’s offices to patients with various forms of cancer, including brain, colon, lung, and kidney cancer. Avastin is made and marketed by Roche subsidiary Genentech.

According to the U.S. Food and Drug Administration (FDA), on Feb. 14, 19 oncology practices were contacted because they had purchased medicine from a supplier that was not approved by the agency.

Associate Director Connie Jung from the FDA’s Office of Drug Security was concerned there could be more counterfeit product on the market. “Clinics need to know who they’re buying their medicines from, they need to make sure they’re buying them from legitimate sources, licensed sources in the United States,” she said in a statement.

The counterfeit Avastin does not appear to have the company name, Genentech, printed on the packages, and it also has lot numbers such as B86017, B6011, and B6010, whereas genuine product contains a six-digit number without letters.

At this stage there have not been any reported side effects or harm to patients who have taken the fake medicine, said the FDA, and tests are still being conducted to determine the contents of the vials. The impact of a single counterfeit drug infusion jeopardizing the efficacy of the treatment, which is normally given in two infusions a couple weeks apart, is so far, not clear.

The FDA has confirmed that the overseas supplier of fake Avastin was Quality Specialty Products, which conducts its operations in the United States with a distributor called Montana Healthcare Solutions.

The latest reports are sending shock waves throughout the medical industry. “When we called Montana Healthcare to ask for their national health code they gave me the runaround. At that point we ceased all business,” said the source from a California oncology clinic that asked not to be named because it did not have permission to speak to the media, in an interview with Reuters.

Despite being notified by the U.K. Medicines and Healthcare Products Regulatory Agency about the problem from the same supplier in December, Roche only confirmed last week that the Avastin was fake.

Warnings of counterfeit medicine have been escalating over the last few years, but problems have largely been concentrated in developing countries in Asia and Latin America, where according to the World Health Organization, around a third of the drugs available on the market are fake. With over 1,700 reports of fake drugs being sold, the United States constitutes only 6 percent of such cases.

However, research from a current congressional report claims that 80 percent of the active ingredients contained in U.S. medication are sourced and produced overseas.

The price of the Avastin from the bogus supplier was under $1,900 for a 400 mg vial, according to a Reuters report, whereas the normal price range for the medicine is almost $2,400. Avastin generates roughly $6 billion per year in sales for Roche.

Eighty percent of the active ingredients contained in U.S. medication are sourced and produced overseas.