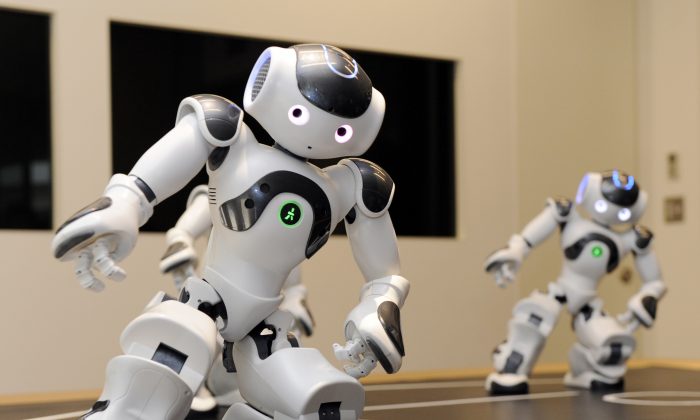 Humanoid robots called 'Nao' from the French robotics venture Aldebaran demonstrate their skills during a display at the French Embassy in Tokyo on October 13, 2010. (YOSHIKAZU TSUNO/AFP/Getty Images)
Science

In 2011, NASA delivered the first robot to the International Space Station (ISS). The Robonaut 2 was largely immobile and served little more as a display than anything else, but cemented the idea that the future of space exploration would be in the hands of autonomous machines.

Now that dream is becoming true, step by step. A group of researchers at the French National Centre for Scientific Research (CNRS) developed a software that could allow robots to develop their own “autobiographical memory,” learning how to do things not from programming but by interacting with the world through visual perception and natural language, just as humans do.

“We believe that if humanoid robots are to engage with humans in useful, timely, and cooperative activities, they must be able to learn from their experience with humans, and importantly, to share their knowledge in a suitable way,” the researchers said in a new paper.

For their proof of concept, the researchers installed their learning software on a Nao robot—famous for its flexible limbs and dancing and soccer chops—and videotaped the robot learning how to aid humans in replacing electronic cards, a periodical task on the ISS.

Not only was the robot able to learn how to complete the task through human instruction alone, it was also able to reverse roles and teach the process to a human who didn’t know how to do the replacement—all in natural language. Granted, the task was numbingly simple, involving the holding and release of a thin piece of silicon, but it marks a conceptual breakthrough.

“Part of the novelty of the current research is to reverse the roles in teaching-learning shared plans. We implement this capacity in our cognitive system, such that the robot is no longer only learning from humans, but now takes on the role of teacher,” the researchers wrote.

The Nao robot demonstrated five levels of learning: the ability to learn low-level tasks from humans, integrate those tasks into a composite plan, perform the task in an efficient manner, transmit the knowledge to other humans, and know how to answer questions from humans unfamiliar with the task.

The hope is that eventually robots permanently stationed on the ISS will act as repositories of expertise for the unique situations that might arise in space, teaching the human astronauts—who are replaced every six months, and thus might not have experience with all the different types of problems—how to act accordingly.

“Researchers are now hoping to test their Nao robot in the real conditions of space operations, with zero gravity,” the CNRS said in a statement. “They would also like to develop another area of application, assisting the elderly, with the robot this time playing the role of a personal memory aid.”