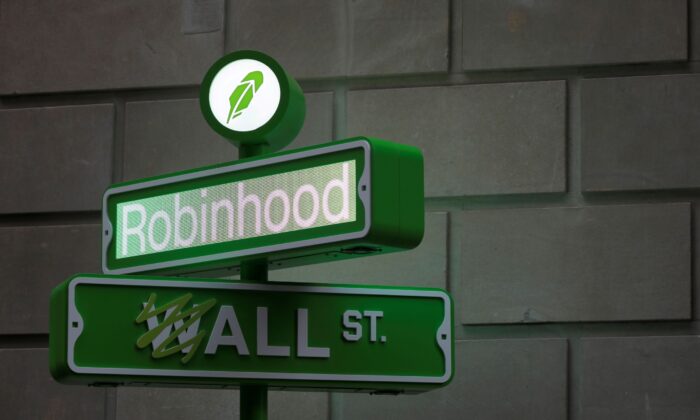 The logo of Robinhood Markets, Inc. is seen at a pop-up event on Wall Street after the company's IPO in New York City, on July 29, 2021. (Andrew Kelly/Reuters)
Companies

Stock trading app Robinhood plans to allow a major portion of its employees to work remotely on a permanent basis, following a similar shift by tech companies in the face of COVID-19 related uncertainties on returning back to offices.

“For a large segment of our employees, there will be no location or regular in-office requirement, and teams will come together in-person occasionally for key experiences and moments that drive connection and innovation,” the company announced in a blog post on Wednesday. “Some teams will need to live within a commutable distance to an office location due to regulatory and business reasons, and a small segment will still need to come into the office.”

Headquartered in Menlo Park, California, Robinhood has around 3,400 workers, and the “Remote First” move will allow the company to hire from anywhere in the country. The pandemic has forced many organizations to rethink their real estate and employee strategies, as many opt for, and invest in, a hybrid work culture.

The plan was announced to the staff in December and the company does not expect any changes in the compensation structure for its workers.

Other tech companies like Shopify and Coinbase have moved fully remote while Meta and Microsoft have yet to decide when they plan on opening offices. The employees currently follow a flexible work schedule, which has been applicable since the start of the pandemic.

The highly-transmissible Omicron variant has dented plans of companies opening up and welcoming back staff to their premises. Although there is a surge of infections across the country, the latest variant displays less severe symptoms among those who are infected and results in fewer hospitalizations.

Prominent organizations are calling for treating Omicron, which is the dominant strain currently, as an endemic condition, claiming that lockdowns and further restrictions will only work to destabilize economies.

After going public in July, Robinhood shares hiked up over 50 percent before cooling off and steadily lowering in value over time. The stock is now 80 percent lower from its peak, with a current market capitalization of about $13 billion, leading some analysts to say that the company could be taken over.

While brokerages typically charge commission on trades, Robinhood offers the service for free. Instead, they make their money from other brokers routing their trades. This sequence, known as an order flow arrangement, is under scrutiny by the SEC.

If the regulator decides to curb the practice, Robinhood will stand to lose 80 percent of its revenue. To charge customers would be going against the primary selling point for the firm—zero brokerage.

It was one of the main initial platforms where Redditors came together to buy shares of meme-stock, GameStop, but the platform soon halted trading in the stock which outraged users, and many called for a boycott of the company.

Robinhood is set to announce its fourth-quarter and full-year 2021 financial results on Jan. 27.