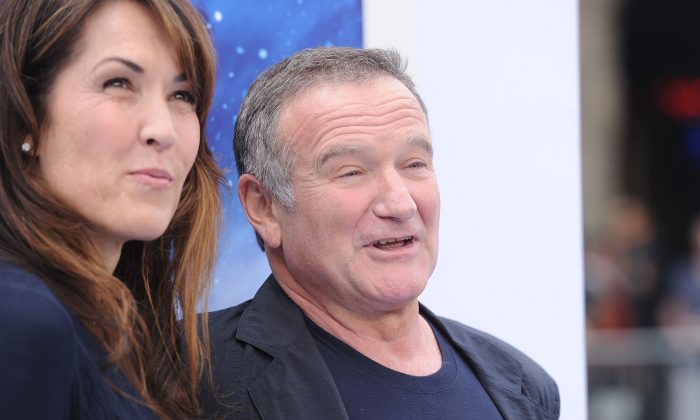 Robin Williams Wife Explains Her Legal Battle With His Kids: ‘Here’s What Happened’

Robin Williams widow says she was “forced into” the legal battle with his kids over his estate.

Susan Williams explained what happened in part 2 of her interview with Good Morning America, which was the first time she appeared in public and talked about her husband’s suicide last year.

“Here’s what happened. Two and a half weeks after Robin had left, I was still in shock. And not back in our home. After being in the trenches with my husband for so long and trying to solve this thing, after seven years together in love, I was told that I might not be able to be able to keep our wedding gifts, that in fact, ‘While you’re out of the house … we need to come in and take everything out,'” she said.

All of the items would go in storage, she said, recalling she was also told: “‘Eventually once we’ve gone through it all, you can decide – tell us which items are yours. And we’ll decide whether or not that’s true.’ That was incomprehensible to me.”

She got even more bewildering news over the phone one day.

“And I’ll never forget being on the phone with one of the trustees and saying, ‘Are you kidding me? I’m not going to be able to keep our wedding gifts?’ What is this? I know Robin Williams is famous. He’s my husband. He’s my husband. If we’re talking that you guys think everything is memorabilia, then take me. He’s touched me. Where does this end?'”

The case was eventually settled out of court in early October. After the settlement, the attorney who represented Williams’ three children–Zachary, Zelda, and Cody–told the Associated Press: “I think they’re just very happy to have this behind them.” Robin and Susan, now 51, had no children together. Susan was Robin’s third wife.

Asked about the agreement, Williams said it was “basically what my husband wanted, which was just that I could live in the home until I die. And that’s it. That it would be taken care of.”