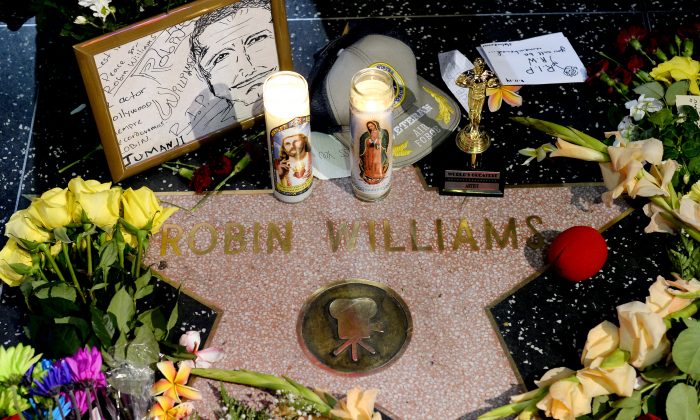 Flowers are placed in memory of actor/comedian Robin Williams on his Walk of Fame star in the Hollywood district of Los Angeles, Monday, Aug. 11, 2014. Williams, a brilliant shapeshifter who could channel his frenetic energy into delightful comic characters like "Mrs. Doubtfire" or harness it into richly nuanced work like his Oscar-winning turn in "Good Will Hunting," died Monday in an apparent suicide. He was 63. Williams was pronounced dead at his San Francisco Bay Area home Monday, according to the sheriff's office in Marin County, north of San Francisco. (AP Photo/Kevork Djansezian)
Social Media

“Dead body” photos of Robin Williams were used to taunt his daughter, Zelda Williams, on Twitter, forcing her to leave the social media website.

The photos, according to TMZ, aren’t of Williams but were taken from a Spanish-language website a few years ago.

“We’ve traced it back … the pic was taken from a Spanish language website that deals with strangulation and has several images posted to illustrate. The image that was sent around Tuesday night resembles Robin, but it was posted several years ago,” TMZ wrote.

According to Jezebel, the photos were tweeted by Twitter users with handles @PimpStory and @MrGoosebuster directly to Zelda Williams.

TMZ also posted the final pictures of Williams. He was spotted at an art exhibition with his wife. In the photos taken last Saturday, nothing appears out of the ordinary and he apparently killed himself the next day via hanging.

His body was found on Monday by a personal assistant.

His wife, Susan Schneider, issued a statement about his death.

Schneider said, “Robin’s sobriety was intact and he was brave as he struggled with his own battles of depression, anxiety as well as early stages of Parkinson’s Disease, which he was not yet ready to share publicly.”

“It is our hope in the wake of Robin’s tragic passing, that others will find the strength to seek the care and support they need to treat whatever battles they are facing so they may feel less afraid,” she added. “Robin spent so much of his life helping others,” it read. “Whether he was entertaining millions on stage, film or television, our troops on the frontlines, or comforting a sick child — Robin wanted us to laugh and to feel less afraid.”

“Since his passing, all of us who loved Robin have found some solace in the tremendous outpouring of affection and admiration for him from the millions of people whose lives he touched.

“His greatest legacy, besides his three children, is the joy and happiness he offered to others, particularly to those fighting personal battles.”