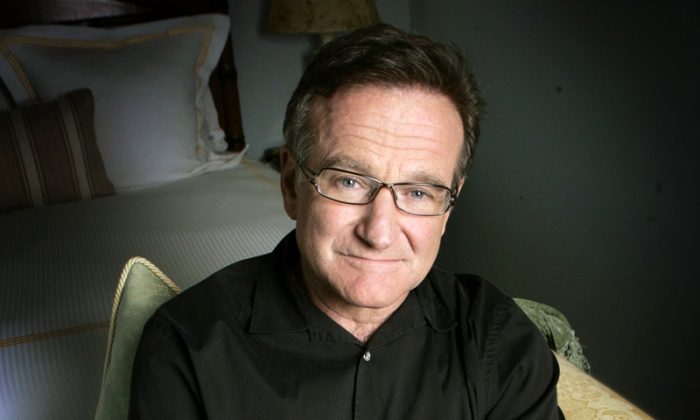 A photo was posted that claims to be Robin Williams’ dead body at the Coroner’s Office, but it’s totally fake.

TMZ reported that the photo is not of Williams.

The photo, the site said, was taken from a Spanish website that focuses on strangulation.

The image was posted on the website several years ago and it somewhat resembles Williams.

As a result of the photo, Williams’ daughter, Zelda Williams, said that she is leaving Twitter.

She wrote: “I’m shaking. I can’t. Please. Twitter requires a link and I won’t open it. Don’t either. Please.”

Law enforcement sources also told TMZ that the photo is not of Williams.

Robin Williams hanged self but no answer as to why
SAN RAFAEL, Calif. (AP) — Although police have now revealed how Robin Williams committed suicide, the Oscar-winning actor’s fans, friends and even family continue to struggle to understand why someone who spread so much joy throughout the world could find so little in his own life that he decided to stop living.

Williams, who made no secret of his decades-long struggles with depression and substance abuse, killed himself by fashioning a noose out of a belt and hanging himself, authorities said Tuesday.

The frenetic funnyman who starred in such films as “Mrs. Doubtfire,” ”Good Will Hunting” and “Good Morning, Vietnam,” had announced only last month that he was re-entering a 12-step program to get his life back on track after months of nonstop work. His publicist confirmed after he died that he had been suffering in recent weeks from a serious case of depression.

Still, even family members were caught off-guard when his body was found in his San Francisco Bay Area home Monday morning.

“I’ll never, ever understand how he could be loved so deeply and not find it in his heart to stay,” his 25-year-old daughter, Zelda Williams, said in a poignant statement released Tuesday.

“He was always warm, even in his darkest moments,” she noted, adding she last saw her father when he recently celebrated his 63rd birthday. It was a day, Williams recalled, that she and her two brothers spent “sharing gifts and laughter” with their father.

Marin County Sheriff’s Lt. Keith Boyd said Williams was last seen alive by his wife, Susan Schneider, who went to bed around 10 p.m. Sunday. She awoke the next morning and left the couple’s Tiburon home, thinking he was asleep somewhere else in the house.

When he didn’t answer a knock on the door a short time later, his personal assistant found him dead in a bedroom. A pocketknife was nearby and Williams also had superficial cuts on his wrists.

Boyd said all evidence indicates the actor committed suicide by hanging himself. A final ruling will be announced after toxicology reports and interviews with witnesses are complete.