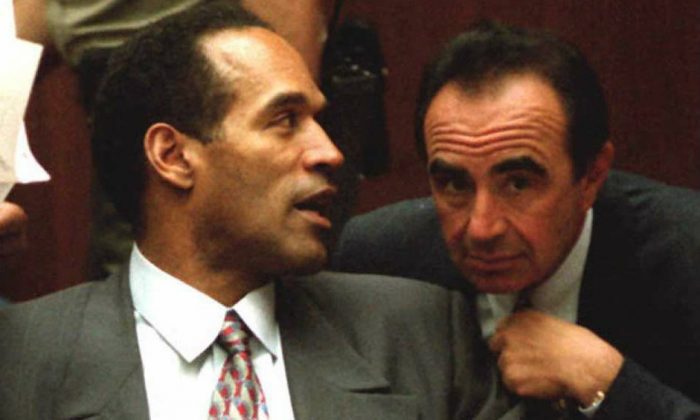 The famed lawyer, Robert Shapiro, who was on O.J. Simpson’s “dream team” of attorneys for the trial of the century revealed what the former football star said to him immediately after the verdict.

“You told me this would be the result from the beginning. You were right,” Simpson whispered to Shapiro in 1995, as related by Shapiro to Megyn Kelly in an interview on May 17.

Simpson has just been acquitted of the murders of his ex-wife Nicole Brown and her friend Ron Goldman.

Shapiro, 73, who still practices law, also told Kelly he believed more than one knife was used in the double homicide, and that the crimes were carried out by more than one person.

FX’s “The People v. O.J. Simpson: American Crime Story,” a 10-episode series which ran from February to April, brought the controversial case back into the spotlight decades later.

In the show, Shapiro, played by John Travolta, tried on the infamous glove in the courtroom.

The lawyer admitted to Kelly that he did in fact try on the glove to see if his client’s hand might fit into it.

“It was a little bit wide in my palm and a little bit long in my fingers. O.J. Simpson has enormous hands, and I knew that the glove would not fit him. No question about it. Wouldn’t even be close,” Shapiro said.

“It did have stains on it, did have certain cuts on it. I didn’t consider it, but, it’s kind of an eerie thought when you say that. As you say it now, it is chilling, but it wasn’t something that I contemplated or thought about at the time,” Shapiro said.

Kelly also asked the lawyer if the fact that Simpson walked free was a fair verdict.

“If you look at it from a moral point of view, a lot of people would say he absolutely did it. I deal in legal justice, as you did as a lawyer, and that’s proof beyond a reasonable doubt. And there’s no question in my mind that any fair juror who saw that case from the beginning to the end would conclude there was reasonable doubt,” he continued.

In the interview, Kelly also asked Shapiro how he lived with himself after the acquittal, a question many people ask themselves about defense attorneys.

“Our system of justice is based on the theory that we hope and pray that innocent people are never convicted,” says Shapiro.

“And the price we pay is that guilty people sometimes do and will go free,” he added.

But there’s one thing Simpson owes Shapiro from the trial of the century: legal fees.

Simpson, 68, is now serving at a 33-year sentence at Nevada’s Lovelock Correctional Center, for kidnapping and robbery in 2008. He is up for parole next year.