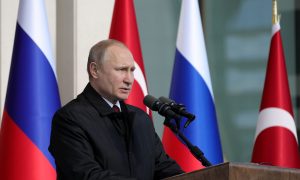 Many stories about the investigation into collusion between the Trump campaign and Russia have been wrong, according to a spokesman for the office of Special Counsel Robert Mueller.

The spokesman did not articulate which stories have been inaccurate, but the statement was issued amid media inquiries about a McClatchy DC article that said Mueller had evidence that President Donald Trump’s personal lawyer, Michael Cohen, traveled to Prague, contrary to testimony Cohen gave under oath.

“What I have been telling all reporters is that many stories about our investigation have been inaccurate,” the Mueller spokesperson said, according to Daily Caller and Washington Times. “Be very cautious about any source that claims to have knowledge about our investigation and dig deep into what they claim before reporting on it. If another outlet reports something, don’t run with it unless you have your own sourcing to back it up.”

The McClatchy story was quickly amplified by a number of major news outlets, including Reuters, The Washington Post, and The Guardian, despite the fact that Cohen has vehemently denied the claim and provided travel documents, including a passport, showing he was in California with his son. Cohen also testified under the penalty of perjury that he never traveled to Prague.

“Bad reporting, bad information and bad story by same reporter Peter Stone @McClatchyDC. No matter how many times or ways they write it, I have never been to Prague,” Cohen tweeted shortly after the McClatchy story was published. “I was in LA with my son. Proven!”

Bad reporting, bad information and bad story by same reporter Peter Stone @McClatchyDC. No matter how many times or ways they write it, I have never been to Prague. I was in LA with my son. Proven! https://t.co/ra7nwjUA0X

The Prague story is vital to news outlets which have pushed the Russia-collusion narrative for more than a year because it would confirm one allegation from the so-called Steele dossier, a collection of reports compiled by a British ex-spy that forms the core of the collusion narrative. Hillary Clinton and the Democratic National Committee covertly funded the dossier. It was then used by the FBI to apply for a warrant to spy on the Trump campaign, despite containing a barrage of claims that even Steele could not verify.

The claim that Cohen traveled to Prague only exists in the Steele dossier and was never verified by another source. Glenn Simpson, the co-founder of Fusion GPS, the firm that paid Steele, pushed the claim to news media and government investigators. Simpson still believes the claim and told the House Permanent Select Committee on Intelligence that Cohen may have traveled to Prague via a yacht and a Russian airplane.

The statement from Mueller’s office reaffirms sworn testimony by former FBI Director James Comey who told the Senate Select Committee on Intelligence last year that many media reports about Trump-Russia collusion were wrong. Comey specifically discredited a Feb. 15, 2017, New York Times article that claimed that Trump’s 2016 presidential campaign “had repeated contacts with senior Russian intelligence officials in the year before the election.”