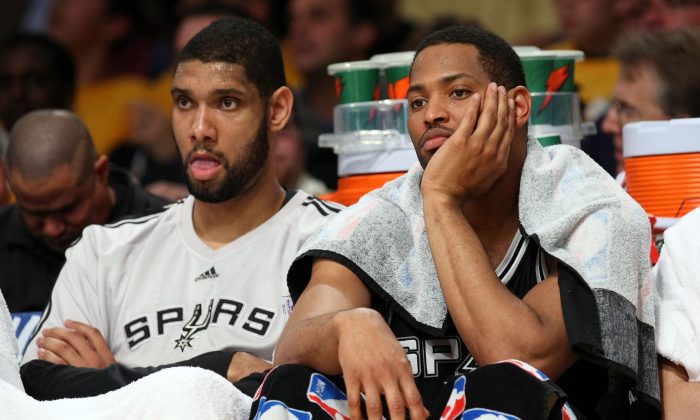 Tim Duncan #21 and Robert Horry #25 of the San Antonio Spurs sit on the bench in the final minutes against the Los Angeles Lakers in Game Two of the Western Conference Finals during the 2008 NBA Playoffs on May 23, 2008 at Staples Center in Los Angeles, California. NOTE TO USER: User expressly acknowledges and agrees that, by downloading and/or using this Photograph, user is consenting to the terms and conditions of the Getty Images License Agreement. (Photo by Stephen Dunn/Getty Images)
Sports

Robert Horry, the former Los Angeles Lakers and San Antonio Spurs player, was involved in an accident in Los Angeles.

Horry, 43, was driving a car that collided with a motorcycle, leaving the rider in the hospital, according to CBS Los Angeles.

Horry was driving a 2014 Infiniti that hit a Yamaha motorcycle on Tuesday during rush hour traffic.

The bike rider was identified as 44-year-old Xerxes Baldonasa of Long Beach.

Horry was not injured in the incident, it was reported.

During his lengthy career, Horry–known as “Big Shot Rob”–won seven NBA titles with the Spurs and Lakers. He also played for the Houston Rockets and Phoenix Suns.