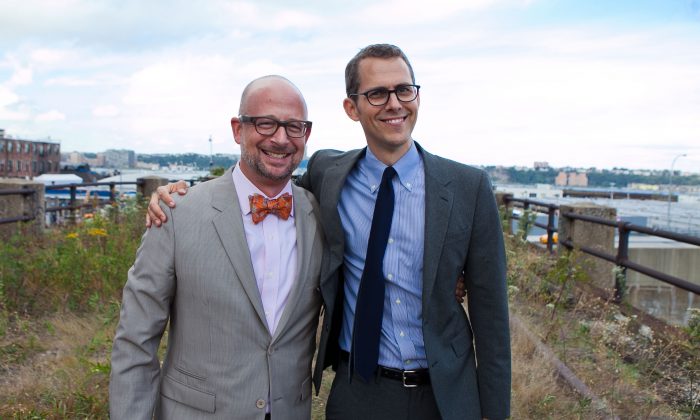 Joshua David and Robert Hammond on the HighLine on the West side of Manhattan, Sept. 20, 2012. (Epoch Times)
New York

NEW YORK—Tearful goodbyes followed a farewell talk by Friends of the High Line co-founder Robert Hammond in Chelsea on Dec. 5.

The High Line was built on the historic freight rails running through Manhattan’s West Side. It has become a popular destination by tourists and New Yorkers alike. The High Line was founded in 1999 by Hammond and Joshua David. Now, as the third and last section of the park is in progress, Hammond spoke about why it was so hard to leave.

Hammond said he knew he had founder’s syndrome and that he was always going to leave, but didn’t expect it to be so hard.

“I thought about leaving after opening section one,” Hammond said. “But I’m very thankful I stayed.”

“It’s the people, that is so hard to leave,” said Hammond, choking up, as he thanked the staff and David.

While he doesn’t have a clear plan yet, Hammond’s next immediate step is in finishing a documentary he is producing with writer-director Matt Tyrnauer on the urbanization of China in reference to the work of urbanist Jane Jacobs.

Hammond recalled he met Tyrnauer, who directed the documentary “Valentino: The Last Emperor,” four years ago. Tyrnauer was obsessed with Jane Jacobs and the two realized there hadn’t been a documentary made of her work.

“I loved that this guy who did a documentary on Valentino was obsessed with Jane Jacobs,” said Hammond, who is now working with Tyrnauer and Mandarin Films on the documentary. Jacobs, who wrote “The Death and Life of Great American Cities,” has been an influential voice in urban planning, but many note that her work was very specific to her time.

“I believe that she wouldn’t want all the things that she prescribed for her neighborhoods, for her cities at the time, to be tried now,” Hammond said.

And after the documentary? Hammond says he doesn’t have a clear plan, but that’s what he’s comfortable with.

“If I picture exactly what I’m going to do right now, it’d be the wrong thing for me,” Hammond said.

The High Line, too, was started without a clear plan in place. Hammond said the critical point was meeting Joshua David.

Hammond, who had come to New York to be an investment banker, quickly acquired a huge stack of rejection letters that he said only made him all the more determined. Newly graduated from Princeton, he said apparently his potential employers could see something in him that he couldn’t—that he didn’t really want the job.

A year after working at Ernst & Young, Hammond quit because he was bored.

The early rejection was a good lesson, he said, because when he started reaching out to people about the High Line, he received so many rejections he started setting a goal for them.

“I set a rejection goal instead of a success goal, where I had to get a certain number every day. So that made me feel better that I met my goal,” Hammond said.

Another turning point came when Hammond was introduced to Amanda Burden, who hadn’t yet been appointed by Mayor Michael Bloomberg as the Planning Commissioner. He accidentally gave her the wrong address and left her standing on the sidewalk in the snow, but eventually was able to give her a tour.

Burden said she’d walked by the rusty rails for decades and couldn’t imagine why anyone would climb up there.

“Of course when I did, it changed my entire life,” Burden said at the talk.

At the time she told Hammond she wanted to help but couldn’t think of how, but after being appointed commissioner Burden played an instrumental role in the rezoning that made the project possible.

“He is both a visionary and a pragmatist,” Burden said at the talk. “He is an indelible contribution to the city of New York.”

The High Line has indeed inspired other communities and other projects, and Hammond said he hopes it’s the action people take from his story, and not just to try to replicate the High Line. He’s talked to many groups over the years, and the projects that want to duplicate the High Line just never seem to take off, he added.

In New York City, the High Line inspired two projects underway in the early stages. The QueensWay project, a greenway-on-the-rails in Queens, will take a very different feel, has funded a study, and aims to have a set plan by mid-2014. The LowLine is a completely unique underground park in a trolley terminal on the Lower East Side.

As for the High Line, Hammond says the future of the space is in programming. The events are what are bringing New Yorkers as well as tourists to the space, which he says it more of a cultural institution than a park, and it’s a positive cycle of job creation, he said.

“We want the High Line to be for everyone,” Hammond said.